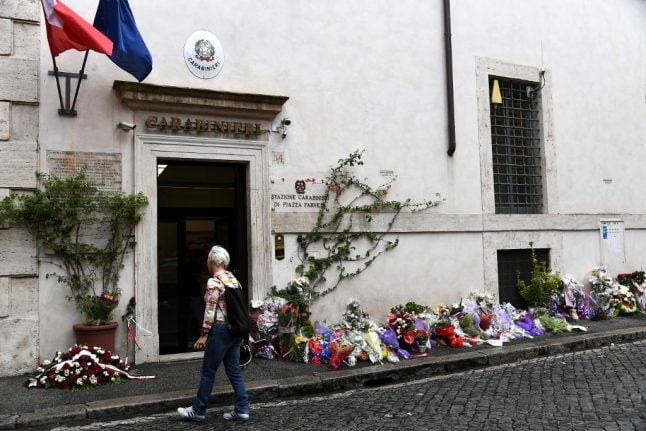 Flowers were laid in front of the station where officer Mario Rega Cerciello was based, and mourners queued up to pay their last respects at a chapel where his coffin was ahead of a funeral on Monday.

Cerciello, 35, was stabbed early Friday after recently returning from his honeymoon.

A photo taken of one suspect blindfolded and handcuffed while under questioning has been criticized as possible mistreatment.

The suspect pictured, identified as Natale Hjorth, was illegally blindfolded “for a very few minutes, four or five” prior to an interrogation on Friday, provincial police commander Francesco Gargaro told the Associated Press.

The head of the carabinieri military police force, Giovanni Nistri, described the incident as “unacceptable”, while Italian media reported that the officer responsible for placing the blindfold would face disciplinary action and be taken off active duty.

Italy's nationalist Interior Minister and Deputy Prime Minister Matteo Salvini was among those who posted the picture of the blindfolded suspect on social media, with the comment: “To those complaining about a prisoner being blindfolded, let me remind you that the only victim who deserves tears was a man, a son, a 35-year-old husband, a carabiniere [police officer], a servant of the country!”

Giandomenico Caiazza, head of a lawyer's union, said the photo might invalidate the interrogation, which police say included a confession. People line up to pay tribute to the officer killed at a church in Rome, where his body is lying in state. Photo: Vincenzo Pinto/AFP

The suspects say they did not realize that Cerciello and a colleague were police officers, but thought they were friends of an alleged drug dealer from whom the pair had stolen a bag after what was supposed to be cocaine turned out to be crushed aspirin, according to media reporters citing investigators.

The victim of the theft tipped off the police, but when two officers in plain clothes went to arrest the two US tourists, one of them pulled a knife.

Police said surveillance cameras helped them track the pair to their four-star hotel where they arrested them. Their bags were packed and they had been planning to fly home that same evening. Officers allegedly found a large knife hidden in the false ceiling of their hotel room.

Some Italian media underscored questions about the case, such as why an alleged drug dealer would go to the police, why the paramilitary policemen went to a scheduled meeting point in plain clothes without backup, and why they did not identify themselves as police or draw their weapons. The police officer's killing tapped into tensions in Italy over immigration when Salvini, responding to initial reports that the suspects were North African, denounced the killers as “bastards”.

Initial confusion was sparked after police released a statement saying Cerciello's partner at the scene had said the suspects were “probably African”.

“Apparently they're not Italians,” said Salvini during a television appearance Friday morning. “What a surprise!”

He called for “hard labour for life… for these bastards”.

Cerciello's funeral is to take place in his home town near Mount Vesuvius on Monday, with Salvini and the country's other deputy prime minister Luigi Di Maio due to attend.

The case has reminded many Italians of a long-running affair that involved Amanda Knox, a US student who was convicted and acquitted years later of the murder of a flatmate in Perugia, central Italy in 2007.

The European Court of Human Rights ruled that Italian authorities had violated her legal rights during the investigation, including by denying her access to a lawyer and failing to provide an independent interpreter.

READ ALSO: Amanda Knox back in Italy as an advocate for the wrongfully convicted