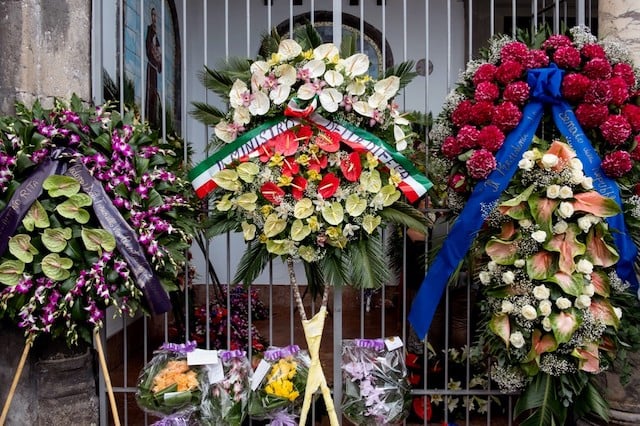 Finnegan Elder, 19, has been charged with aggravated homicide along with friend Gabriel Natale Hjorth, 18, following the death of officer Mario Cerciello Rega, who suffered multiple knife wounds in Friday's attack.

Elder has confessed to stabbing Cerciello, 35, with a US Marine partially serrated, close-quarters combat knife, according to police. But he says he mistook the plain-clothed officer for a dangerous drug dealer and used the weapon in self-defence. His father Ethan Elder said on arrival in Rome that “the first thing I need to know is how to get into prison to see my son,” before heading directly with his lawyer to the city's Regina Coeli jail, according to Italian media reports.

“We feel like our world has come crashing down,” Elder's mother Leah said in an interview with Italy's La Stampa daily. “I don't know how to describe it. It's like a nightmare we'll wake up from.”

Their son was high on a mix of spirits, beer and prescription medicines when the attack took place, police said on Tuesday. Cerciello had tackled him to the ground during a nighttime drugs raid in a genteel Rome neighbourhood. “Finn is a thoughtful boy. The only explanation I can give, if he really is involved directly in this tragedy, is that he was terrified and therefore reacted rashly,” the suspect's mother said.

She added that he had in the past taken powerful painkillers for an injury to his hand suffered while working part-time in a car parts shop. He had to have part of a finger amputated after a nasty fall off a ladder which left his left hand partially paralysed, she said.

The teenager took “strong painkillers and opioids” to manage the pain, as well as marijuana, she added.

Cerciello and his plainclothes partner Varriale had been tasked with intercepting the Californian teens after an intermediary on a drug deal reported them to the police for stealing his bag after they were sold aspirin in the place of cocaine.

“I didn't know he did any other drugs,” Leah Elder said. Asked about a violent incident when her son was younger, in which he punched a fellow teenager who fell and hit his head, she said it was part of a boxing ritual called “fight night” and not a sign Finnegan was violent.

“Finn had agreed to take part in a match with a friend, the other kids were gathered around watching. He hit him and the boy fell and hit his head and was hurt badly, but recovered in a few days and is very well now,” she said.

He was ordered to perform community service and after that his criminal record was wiped clean, she added.

'Having a knife is not unusual'

The weapon used in the attack on Cerciello, which has an 18-centimetre blade, was brought over from the US.

“Having a knife is not unusual for a kid of his age in our neighbourhood,” Elder said.

The family, which has Irish, Lithuanian and Spanish roots, had sentimental ties to Italy. The Elders had been on their honeymoon in Tuscany and “we fell in love with the country”.

“When Finn said he was going to Italy too, where I used to go as a girl, we were happy,” Leah Elder said.

Meanwhile a photo of Elder's co-accused wearing a blindfold during interrogation has prompted a police probe.

As investigators search officers' mobile phones for evidence who took the photo of Natale Hjorth bound and handcuffed in the presence of several carabinieri, the person believed to be responsible for blindfolding him has been placed under investigation for possible abuse of office, Italian media reported on Wednesday.

There are concerns that the incident could invalidate the suspect's interrogation, during which he reportedly confessed.