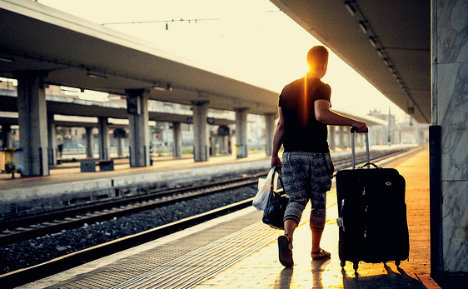 Congratulations. However, moving to Italy (or any other country for that matter) is often fraught with difficulty. Here are a few common mistakes foreigners make when living in Italy.

Italy can be complicated. Its bureaucracy can baffle and most of the information you need to live a rich and full life is probably going to be written in Italian or bad English, if it's written down at all.

Making a few Italian friends right away will really give you the inside track when it comes to living in Italy, as they will be able to guide you when you can't find the information you need. They will also be eager to help you get a handle your  new language and culture, so it's really worth going the extra mile and befriending locals.

READ ALSO: Where do all the English speakers live in Italy?

Speaking of language, you should stop saying you like things: in Italy, things like to you, or please you.

Super importantly, if you want to tell an Italian guy or girl you like them, you have to say 'mi piaci'.

Assuming things will be open at lunch

Italy is often referred to as 'a country of small and medium sized businesses' by economists. While this has wide-reaching implications for the country's economy, it also means something very important to ordinary people: almost everything is closed at lunch.

All public offices, banks and shops close at lunch with the exception of large supermarkets and high-street chain stores.

It is therefore a bad idea to assume you will be able to use your lunch break to go and do things like get a bank statement, take your shoes to the cobblers or get some keys cut. Annoying yes, but it does mean that you have no other option other than to stop stressing out and have a proper sit-down lunch.

Forgetting to validate your train tickets

If you're travelling by train in Italy, there are boxy looking machines (usually green or yellow) on the platform: they are used to validate your train tickets.

You need to place your ticket in the machine before getting on the train if you don't want to be fined and/or thrown off by the conductor once you are in transit.

It's easy to forget, but if does slip your mind, just walk along the train until you find the conductor and let them know you have forgotten and you won't get into trouble.

Not realizing how expensive painkillers are In many countries, paracetamol and ibuprofen products can be picked up at the supermarket for small change. Not so in Italy.

Generally speaking, you will need to shell out more than €5 at the pharmacy for a simple pack of painkillers, while more advanced cold a flu formulas can cost upwards of €10.

For a country which prides itself on its admittedly wonderful gastronomy, there is an awful lot of UHT milk in Italy. If that bothers you, check what milk bars are using before you order a milky coffee.

On the subject of milk, it can be tricky to find alternatives to full-fat cow's milk in cafes, so expect to be disappointed if you order a 'skinny latte' or 'soy-milk macchiato'.

Showing up early to parties

'Fashionably late' is always a good idea for parties the world over. However, in Italy it is a practical necessity, unless you want to be standing on your own, waiting for everybody else to arrive.

For informal evenings with friends, anything up to half an hour after the invite time is on the polite spectrum.

Obviously, group social contexts are one thing, business meetings and dates are another. In the case of the latter two, it's polite to be punctual.

Thinking you can use your bank cards everywhere

By the letter of the law, businesses in Italy are legally obliged to let you pay on your card for any item over €5.

However, as previously stated, Italy is a country of 'small and medium sized businesses', which has implications here too.

READ ALSO: The essential guide to opening a bank account in Italy

Most independent shopkeepers have either so far refused to buy a chip-and-pin machine for their premises or simply will not accept cards for small transactions as it is not worth them losing part of your fee as commission. Italian retail association Confesercenti estimates card payments cost businesses €1,800 annually.

Tipping each time you go to a bar

In many countries a 10 percent service charge is the done thing, but there isn't really a tipping culture in Italy so there's no need to throw your cash around.

If you want to leave a tip, just round the bill up to the nearest 0 or 5 and that will do nicely.

Drinking too much at parties

Some cultures drink more than others and the Italians drink less than most.

Obviously this is a bit of a generalization, but if you want to make friends or network at your next Italian party, it's probably a good idea to take it easy on the booze.

In Italy, drinking so much that you shout/fall over/cry/fight/tell the dude next to you 'I love you'/discuss how you would love to open a bar with your new best mate etc. is very much the exception and not the norm.

Putting your washing machine on at night

Most people live in blocks of  flats in Italy and there are actually laws about what times you can make noise and put your washing machine on.

Precise rules vary building-to-building but if you don't want to incur the wrath of an overzealous neighbour, have your laundry finished by 10pm.

Kissing or not kissing Kissing rules are a nightmare for foreigners in Italy, as there is no blanket rule that tells you how to behave: what is culturally normal in one part of the country is less normal in another area.

Generally, men and women can (but don't always) give each other a kiss on each cheek for hello and goodbye in most areas of the country. In the centre-north it's less common for men to greet each other like this. However, in many parts of the south – Sicily in particular – men do give a kiss on both cheeks when they greet each other.

Needless to say, kissing is informal, so wherever you are, you don't want to kiss your boss, bank manager or waiter. Even then not everybody kisses, some people just like their personal space.

With your friends, a good bit of advice would be to simply follow other people's lead: if they are accustomed to a kiss they will probably warn you and say 'un baccio' before they move in for the kill.