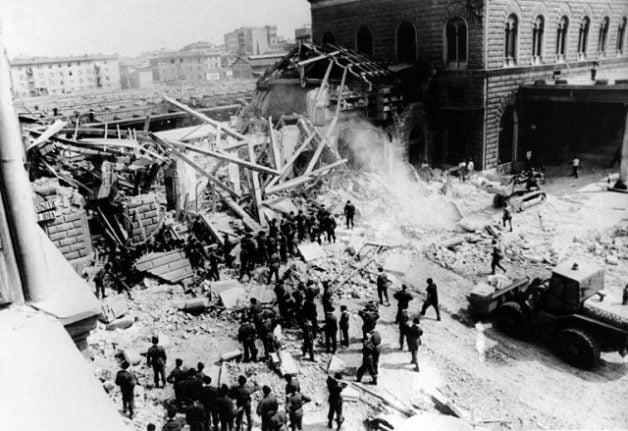 The scene of the attack. Photo: AFP

On August 2nd 1980, the bombing of a train station in the northern city of Bologna left 76 people dead and a further 200 wounded in a terror attack that shocked Italy.

A device left inside a suitcase in a waiting room at Bologna's train station exploded at 10.25am.

It was a warm summer weekend and that waiting room, unusual in having air conditioning, was full of people sheltering from the heat.

Some of those injured later died, bringing the total death toll to 85. Most of the train station was destroyed.

The victims were a mix of station staff, local Italians, and tourists including some from abroad. The youngest was a girl, Angela Fresu, aged just three.

The northern Italian university city was unprepared for such a devastating attack, and did not have enough ambulances to transport the wounded. Some were taken to hospital in taxis. Flowers left next to a damaged train. Photo: AFP

At first, those present thought the blast was an accident; a gas explosion perhaps.

It wasn't until later in the morning that police began to investigate it as a deliberate bombing. Around midday, different terrorist groups began making claims of responsibility for the act.

The bombing remains Western Europe's fourth deadliest postwar terror attack, and one of the most devastating in Italy's history.

It came as part of the so-called 'Years of Lead' in the 1970s and 1980s, during which the mafia, the ultra-leftwing Red Brigades and neo-fascist groups carried out violent attacks.

The Bologna massacre was attributed to the neo-fascist group NAR, and several members were convicted over the attack, but the investigation also uncovered murky links to organised crime groups and even possible ties to the Italian secret service.

The trial lasted decades, with appeals, acquittals, and multiple diversions — a new appeal trial began in 1993, largely due to lobbying from the Association of the Relatives of the Victims.

However, it's thought likely that some of those involved in planning the attack will never be brought to justice.

In the city today, efforts are continuing to unearth new leads in the investigation.

On 39th anniversary, Italian ministers proposed opening an 18-month “technical and non-political” enquiry aimed at “finding the truth” about those behind the massacre.

A version of this article was originally published in 2018.