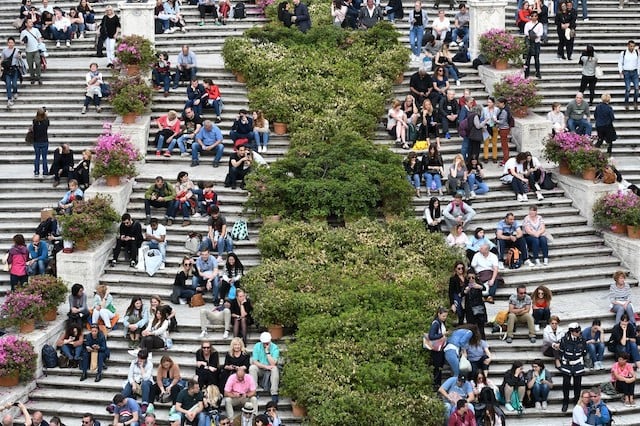 The Spanish Steps are usually a popular spot for a rest. Photo: Vincenzo Pinto/AFP

“Get up everyone, it's the rules: you can't sit here,” a journalist for Adnkronos reported hearing police telling the crowds on the iconic stairway that leads from the church of Trinità dei Monti to Piazza di Spagna in the heart of Rome's historic centre.

At mid morning the 135 steps, usually filled round the clock with people taking pictures or simply a rest, were practically deserted, the reporter said. He counted eight police officers moving people along.

The patrols are part of Rome's latest crackdown on bad behaviour in the city centre, timed to coincide with the peak tourist season. Police patrol the base of the Spanish Steps. Photo: Marie-Laure Messana/AFP

Under the new rules, in force since the beginning of June, police can impose stiffer fines for everything from bathing in fountains to dragging wheelie suitcases down historic steps, going shirtless to putting your mouth too close to public water fountains.

Ticket touts, unauthorized food and drink vendors, leaders of pub crawls and people who dress up as Roman centurions also risk a penalty.

While the rules on sitting aren't entirely clear, the ordinance includes special protections for Unesco sites such as the Spanish Steps, where visitors are banned from leaving any rubbish, graffiti or other damage – on pain of having to clean it up themselves.

There's also an “anti-bivouac” clause that can potentially include anything from bedding down at historic sites to having a picnic – or, apparently, sitting down.

While police have long handed out fines for clambering into fountains or boozing at famous landmarks, the latest rules set even stiffer penalties: at least €400 for damaging any part of Rome's heritage, and up to €450 for bathing in a fountain. Other bad behaviour can earn a fine anywhere between €100-400, and potentially a Daspo (or anti-social behaviour order) temporarily banning the offender from the city centre.

But are police being overzealous by stopping people from sitting down?

“So long as some tourists – not all – continue to behave excessively, like those who damage the Colosseum by carving their names into it or bathe in our historic fountains, applying the rules rigorously, like in this case, is understandable,” local councillor Anna Vincenzoni told Adnkronos.

“The steps are a work of art, and you don't sit on works of art,” agreed the head of a local residents' association, Gianni Battistoni, who said it was too difficult to stop people eating and drinking on the staircase any other way.

“People come, pass through and leave. We can finally say that the steps have been given back to the city,” he said.

One prominent art critic and commentator, however, called the measure “excessive, practically fascist”. “Since time immemorial passing travellers have sat on the steps and admired the landscape,” said Vittorio Sgarbi.