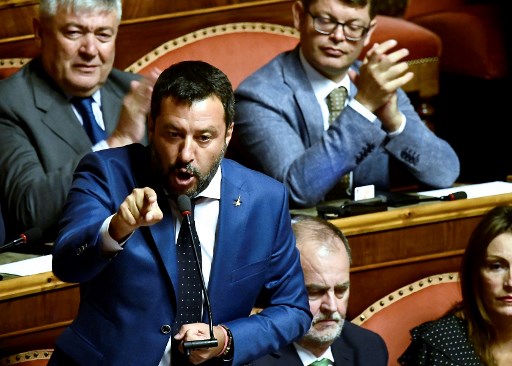 Interior Minister Matteo Salvini's anti-migration League party had called for the vote after he withdrew support for the coalition government – which the League is part of – last week.

But a majority of senators from former coalition partners the Five Star Movement (M5S) and from the centre-left Democratic Party (PD) opposition rejected the motion.

Instead, lawmakers approved an M5S-PD motion calling for a debate next week during which Prime Minister Giuseppe Conte would address the Senate.

He kicked off Tuesday's debate with a stunning U-turn, offering to back a key parliamentary reform of the M5S, after saying last week that he could no longer work with them.

In exchange, the anti-establishment M5S was supposed to back his call for swift elections despite the League's withdrawal from the increasingly acrimonious alliance.

Before and after he spoke, the room descended into chaos as senators shouted over one another and the President of the Senate begged for calm.

While the government is still in place, the Senate decides whether to initiate a no-confidence vote in the 14-month-old administration led by Conte, an independent approved by co-deputy prime ministers Salvini and M5S leader Luigi Di Maio last year.

After little support emerged for Salvini's call for a no-confidence motion in the Senate, he offered Tuesday to support the M5S reform that would slash the number of lawmakers from 950 to 605.

“Let's vote the cut of 345 parliamentarians and then let's hold an election immediately,” Salvini suggested during the noisy Senate session.

Di Maio, who is not a senator, welcomed Salvini's offer to back the M5S reform, but said it was up to President Sergio Mattarella to decide on elections.

“The country has been waiting for years. Next week we cut 345 parliamentarians,” Di Maio said on Facebook.

“I am still seriously worried about millions of Italian families and the risk of an increase in VAT.”

The M5S, PD and other parties have been holding talks on a transitional government to pass the parliamentary reform and next year's budget to avoid an automatic rise in value-added tax that would hit the least well-off the hardest. Di Maio also took a swipe at Salvini, noting that he had referred to his former political partner as a “friend” during the Senate debate.

“Friendship is a serious thing, it is a fundamental value in life, extraordinary. And above all, true friends are always loyal,” Di Maio said.

Salvini had wanted a vote on the government's future to take place as early as Wednesday and for elections to follow in October, in order to capitalise on his party's current popularity.

Opinion polls are suggesting the League could garner 36-38 percent of votes, which would allow it to pick and choose partners for a future government.

Matteo Renzi, who was PD premier from 2014-16, warned Tuesday that snap elections would be a “disaster” that would plunge Italy into recession.

“Lawmakers must say today that Salvini is in the minority,” Renzi said shortly before the debate, suggesting that even League leaders were surprised at how badly the crisis has unfolded for them.

“We have the chance to turn the page,” Renzi said, extending a hand to the M5S for a new coalition.

Both the PD and M5S are divided on whether to form an improvised alliance, something the PD refused to do after May's elections, prompting the unwieldy M5S-League coalition.

Salvini is also seeking allies, both in the Senate and for possible elections, from former premier Silvio Berlusconi's Forza Italia and the post-fascist Brothers of Italy, led by Giorgia Meloni.

Those parties could not provide the support Salvini needs in the Senate, however.