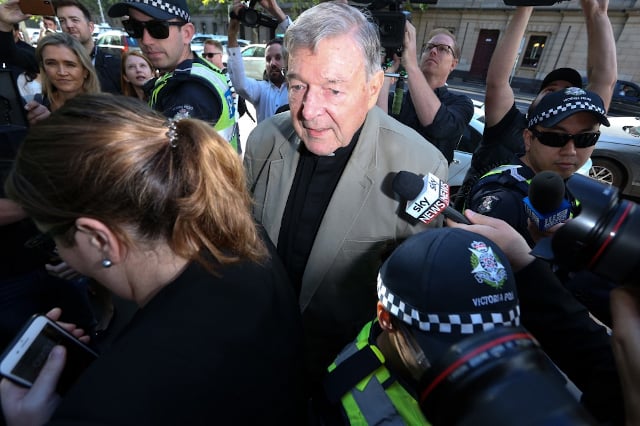 If Cardinal George Pell's conviction is upheld, it could lead to his expulsion from the priesthood. Photo: Asanka Brendon Ratnayake/AFP

Pell, 78, the former Vatican number three, was sentenced in March to six years in prison for sexually assaulting two choirboys in the 1990s.

A three-judge panel of Victoria state's Supreme Court has been deliberating since hearing his appeal in early June.

The judges, who will give their verdict on August 21st, can decide to reject the appeal, order a retrial or acquit Pell, the Catholic Church's most senior convicted child molester.

Pell was convicted of sexually abusing the two choirboys after Sunday Mass at St Patrick's Cathedral in 1996 and 1997 when he was Archbishop of Melbourne.

His lawyers raised 13 objections to his conviction on five counts of sexual abuse, arguing it was “physically impossible” for the cleric to have committed the crimes in a crowded cathedral.

They acst doubt on everything from the timing of the incident following Sunday services to whether he would have been able to move his cumbersome archbishop's robes easily enough to commit the assaults.

Legal expert Jeremy Gans, a professor at the University of Melbourne, told AFP he believed Pell was “likely but not certain” to win the appeal as the case was “not typical” for its heavy reliance on one person's testimony.

The second former choir boy died of a drug overdose in 2014.

“It's clear that no matter what the ruling of the court is, there will be people very angry on one side or another,” he said.

Whichever side loses the appeal is expected to take their case to Australia's High Court – the country's final court of appeal.

The case has not only proved highly divisive in Australia – drawing battle lines between supporters of Pell and the Catholic Church on one side and victims and their supporters on the other – its impact has been felt globally.

Since his conviction, Pell has been removed as the Vatican finance chief and lost his place in the so-called C9 Council of Cardinals which is effectively the pope's cabinet and inner circle of advisers.

The Vatican, long criticized for its response to accusations of child sexual abuse by Catholic priests, has opened its own probe into Pell's actions.

If his conviction is upheld, it could lead to his expulsion from the priesthood.

Local media have reported Pell is also facing a civil suit that alleges he failed to protect victims of a priest he knew was abusing children at a Melbourne all-boys Catholic school in the early 1980s.

Lawyers for another man, who claims the cardinal sexually assaulted him in a swimming pool in Ballarat in the 1970s, said in March they would launch a civil suit after prosecutors dropped a criminal case.

Australian authorities are also investigating whether Pell broke prison rules after a letter he wrote to conservative supporters appeared online.

In the handwritten text, Pell says he received 1,500-2,000 letters of support, which along with other messages have brought “immense consolation”.

He gained “purpose”, he said, from the idea that his “small suffering” had brought people closer to “Jesus' suffering”.

“We must always remember that the Church is one… good families stick together whatever their differences.”

Pell is permitted to write letters from prison, but he could have broken the law if he encouraged them to be made public.

Officials indicated that the investigation could be fast-tracked in order to be completed before the ruling in the appeal is issued.