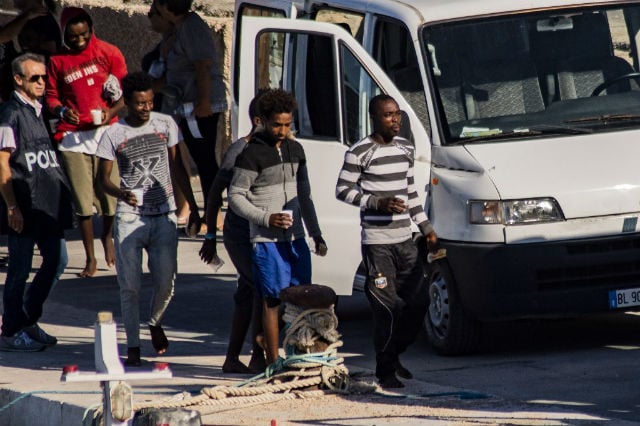 27 migrants are escorted to a van on Lampedusa on Saturday. Photo: Alessandro Serrano/AFP
In a letter, Salvini told Prime Minister Giuseppe Conte he could authorise the “alleged” minors to leave the Open Arms ship, despite it being “divergent to my orientation.”
However, the remaining 105 adults and two accompanied children must stay on board in what the charity Proactiva Open Arms said were “untenable” conditions.
“The go-ahead for the disembarkation of these people is the exclusive responsibility of the prime minister,” Salvini wrote in reply to a humanitarian request from Conte. The interior minister has the final say on border issues.
The charity said it would need time to break the news to the migrants that most of them must remain on board. Some were rescued more than two weeks ago.
“They will be evacuated by the coastguard of Lampedusa,” it tweeted.
READ ALSO:
This is the umpteenth standoff between a charity vessel rescuing migrants making the perilous journey across the Mediterranean and Salvini, but this time set against the background of a political crisis in Rome.
Salvini, who is also deputy prime minister, has gained popularity through his hardline policies against migrants and asylum seekers.
He agreed last year with coalition partner the Five Star Movement's (M5S) Luigi Di Maio for Conte to be prime minister.
But the men's relationship has unravelled since Salvini, leader of the anti-migrant League, last week pulled his party out of the ruling coalition in the hope of toppling the 14-month-old government.
Political crisis
The migrant standoff has taken centre stage in the political crisis, pending a potential Senate no-confidence vote in Conte on Tuesday.
The ship has been anchored within swimming distance of southern island Lampedusa with 134 migrants on board since Thursday.
A Sicily prosecutor on Saturday sent judicial police to coastguard headquarters in Rome as part of a probe into alleged kidnapping and abuse of office because the Open Arms has not been allowed to dock.
Police took records of communications between the interior ministry and rescue services in order to verify the chain of command for who is preventing the ship from docking, the left-leaning Repubblica daily said.
Safe port
Italy has evacuated a handful of people from the Open Arms for medical treatment but Salvini refuses to allow the vessel to dock despite other European countries having agreed to take in the people on board.
The ship's captain Marc Reig said Friday the migrants, rescued after leaving chaos-stricken Libya, were “broken psychologically”.
The founder of NGO Proactiva Open Arms said the situation aboard the vessel with so many traumatised people was “untenable”.
“There are constant fights, arguments on board,” he said on Twitter. “The truth is the tension is untenable.”
“From today, we can't be responsible or guarantee the security of the people we have on board the Open Arms,” he said on Facebook.
The mainly African migrants aboard Open Arms have been plucked from boats in the Mediterranean this month, with weather conditions encouraging more departures from Libya.
Political not humanitarian
Salvini tweeted that if the ship had gone to Spain instead of Italy 16 days ago “you would already have been home.” Proactiva Open Arms is based in Spain.
“The NGOs' battle is political and certainly not humanitarian, played out using the lives of migrants,” he said.
Conte said Thursday that France, Germany, Romania, Portugal, Spain and Luxembourg had agreed to take in the migrants.
But interior ministry sources said Friday that “no European country has taken formal steps to take the migrants on board.”
Earlier this month, Salvini signed a decree banning the Open Arms from Italian waters, saying it was to protect public order. But Proactiva appealed to the administrative court which on Wednesday suspended his decree.
Salvini then signed a new order blocking the ship, but in a demonstration of his diminished power, Italy's Defence Minister Elisabetta Trenta blocked it as an act of “conscience”.
Salvini said in his letter to Conte that he hoped for a decision Monday on his appeal against the administrative court's ruling.
Another rescue ship, the Ocean Viking, operated by SOS Mediterranee and Doctors without Borders (MSF), is also looking for a port to dock with more than 350 migrants on board.