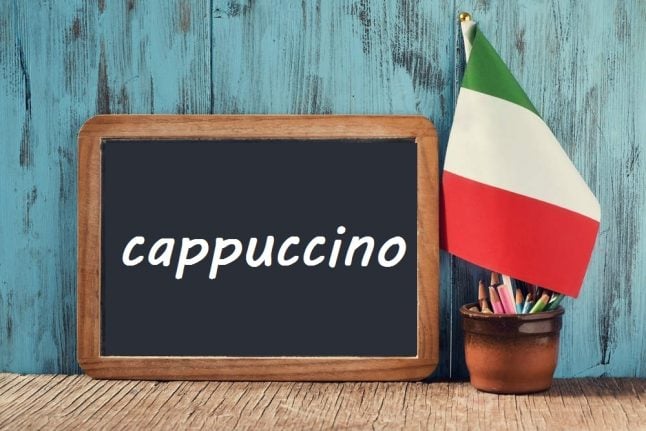 A cappuccino is, of course, an espresso-based drink with frothed milk.

Coffee experts might know that the exact ingredients and their quantities vary from country to country: in Italy, the drink is often slightly smaller in volume than elsewhere, made with a 25ml espresso and then equal parts milk and steamed milk, with a total volume of around 150ml.

In other countries, it's usually made of one part espresso, one part milk and one part steamed milk, and in many of the best known coffee chains, the drink is 360ml, more than twice as large as an Italian cappuccino. And recipes might differ slightly, perhaps incorporating whipped cream or cinnamon.

Perhaps not a totally traditional cappuccino, but one of the cutest we've seen. via GIPHY

There are also regional differences in how and when the cappuccino is typically drunk.

In Italy, the cappuccino is first and foremost a breakfast beverage, served with a pastry — the exact kind will depend on the region.

In Rome, a cornetto or brioche (very similar to a croissant) is the perfect accompaniment, in Liguria the savoury focaccia is favoured, while a Neapolitan breakfast might pair a flaky sfogliatelle with coffee. It's totally acceptable (and delicious) to dip your pastry into the frothy cappuccino.

Less acceptable, at least according to sticklers for Italy's seemingly endless rules around food, is ordering a cappuccino after midday. Because of the high volume of milk, it's seen as too heavy for the afternoon, especially directly after a meal, and foreigners are often warned it will mark them out as a tourist. In Italy, it's more common to have your cappuccino or cafe latte as a morning treat, and an espresso at other times during the day.

In practice, Italians are well aware that coffee culture differs between countries and you're highly unlikely to be told off, so we say order your cappuccino whenever the mood strikes.

As for the origin of the word, it actually predates the cappuccino as we know it today.

Originally, it was used to describe a beverage made of coffee, egg yolks, sugar and cream, and got the name cappuccino (literally meaning 'little Capuchin') because the light brown shade supposedly matched the colour of the long hoods worn by Capuchin monks.

These drinks are believed to have been created in Vienna in the 1800s, where they were known as Kapuziner. Around the start of the 19th century, the modern espresso machine was becoming popular, and the Italian cappuccino was invented, borrowing the name. Early iterations of the drink were a bit of a crossover between the Viennese style and modern Italian style, served with cream and chocolate shavings, and it wasn't until after the Second World War that the cappuccino became more standardized.

A final point: in Italy, the plural of cappuccino is cappuccini, so you'd order due (or tre, or quattro) cappuccini, per favore. But because the word is fully integrated into the English language, it sounds much more natural to use the Anglicized plural 'cappuccinos' if you're ordering in English.