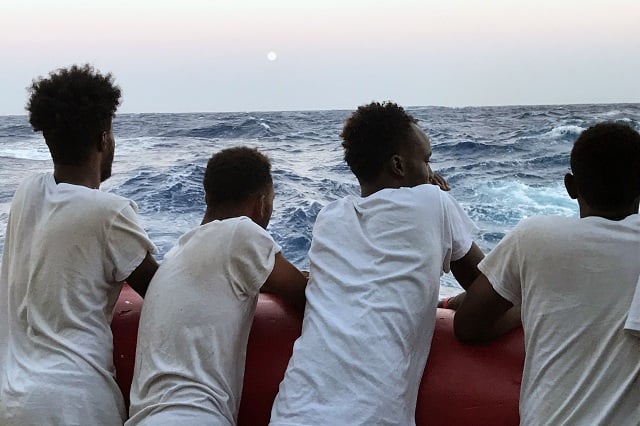 On Thursday, the interior ministry said that women and children stuck on the vessel would be allowed into Italy, though a ban on the ship entering Italian waters remains.

“Women, children and sick people will be allowed off the Mare Jonio,” the ministry said in reference to the ship run by Mediterranea Saving Humans.

“The ban on (the vessel) entering Italian waters remains,” the ministry said.

“Some of them are babies: castaways with a pacifier in their mouth,” the charity said of the rescued migrants. They included 26 women, eight of whom are pregnant.

“The raft we fortunately pulled them out from was adrift” and starting to deflate, it said on Facebook.

The survivors told a journalist from the Repubblica daily on board the ship that six people had drowned. “You arrived just in time,” he quoted the survivors as telling the crew of the Mediterranea's ship.

“The dinghy was about to collapse. Last night it began to deflate. A wave hit it and many of us fell overboard. Six of us didn't know how to swim, and died,” they reportedly said.

The rescue brought the total number of migrants saved to over 200 this week. Italy and Malta have repeatedly refused to allow charity vessels to dock until other EU nations agree to take in the migrants on them.

Hardline interior minister Matteo Salvini on Wednesday forbade the Mare Jonio from approaching the Italian coast, although he was effectively out of a job after Giuseppe Conte was asked to form a new government on Thursday.