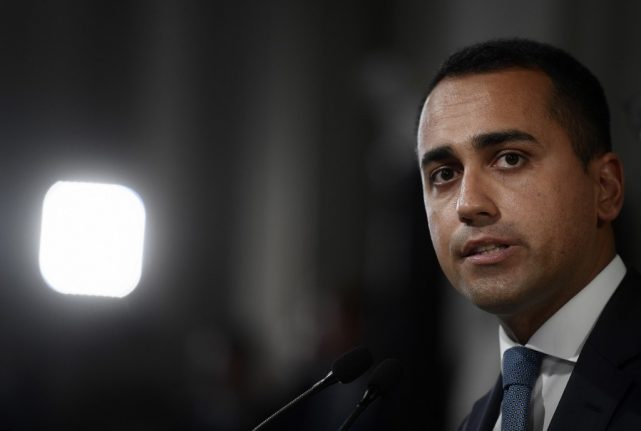 M5S chief Luigi Di Maio said “either we are in agreement on carrying through the points of our (M5S) programme, or we stop here”.

Should the Democratic Party (PD) — which was the Movement's bitter enemy until just a couple of weeks ago — not agree to the M5S's key policy demands, “it would be better to go back to the polls as soon as possible,” he said.

Di Maio's warning followed consultations with premier-designate Giuseppe Conte, who has been tasked with forming a new government following the collapse of Italy's populist coalition earlier this month.

“We're not looking at a government just to get by, we consider some of the points of our programme indispensable,” he said.

The PD's reaction was swift and sharp, with Graziano Delrio, the party's lower house leader, insisting it was “committed to loyally supporting the efforts of Prime Minister Conte. This effort alone has already restored confidence in Italy.”

“Di Maio's ultimatums to the premier designate are completely unacceptable,” he said.

Conte met with all Italy's main parties on Friday as he raced to ensure his coalition would have the necessary working majority.

Political watchers have said Di Maio, 33, is fighting for his political life after the previous M5S-League coalition saw him reduced to an extra in what essentially became hard-right interior minister Matteo Salvini's show. Di Maio has reportedly demanded he be kept on as deputy prime minister — something the PD is set against. “Luigi's most bellicose advisors are entertaining the idea of pulling the rug on the deal if the negotiations for cabinet posts go badly for their chief,” Simone Canettieri wrote in the Messaggero newspaper on Friday.

Canettieri said that Di Maio was sending “clear warnings” to Conte, including his insistence that any programme accord between the M5S and PD would have to be voted on online by the Movement's members. That vote is expected to take place only once Conte has unveiled his team next week.

The M5S is flexing its muscles because it was the biggest winner in last year's general election, with more than 33 percent of the vote, while the PD came in second with nearly 19 percent.

Michiel van der Veen, an economist with RaboResearch, warned that “plenty of (M5S) voters are expected to oppose a tie-up, while Five Star also wants technocrats in important ministerial positions rather than the PD's preferred option of politicians”.

The parties are also divided on issues such as migration laws and a high-speed railway between Italy and France.

Milan's stock market sunk into the red over Friday's tensions. In the government bond market, the “spread” between Italy's bond yields and those of rock-solid Germany widened, indicating that investors were demanding a higher risk premium in return for investing in Italian sovereign debt.

Should the talks break down, Italy could hold an election at the beginning of November.