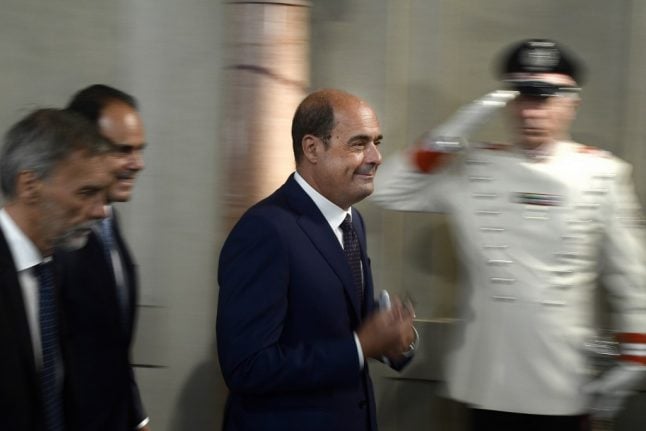 Founded in 2007, it currently effectively has two leaders: soft-spoken and measured chief Nicola Zingaretti, 53, and former prime minister Matteo Renzi, 44, who has seized on Italy's political crisis to flex his considerable party powers.

It was Renzi who touted uniting with a previously loathed group he once scoffed at for “calling into question the Moon landing”.

The Democratic Party (PD) was left reeling after the anti-establishment Five Star Movement (M5S) triumphed at the general election last year, going on to form a coalition with the far-right, anti-immigrant League. After coming second in the vote, the PD proceeded to drop into third place in voter intentions as the League under strongman Matteo Salvini skyrocketed in popularity while painting the centre-left as a discredited political elite.

The social democrats had consistently ruled out an alliance with the M5S — until Salvini pulled the rug on the coalition last month and Renzi stepped back into the limelight to suggest a M5S-PD deal to save the country from fresh elections. Zingaretti, who was elected the party's leader in March and had been insisting such a deal would only favour Salvini, was forced to relent — on the condition that the coalition would last until the end of the legislature in 2023.

“The poor chap had no choice, because the PD has a leader, but its leader does not have [command of] the PD,” summed up political philosopher Massimo Cacciari in La Stampa. The party hopes the accord will not only keep Salvini from power, but give it time to improve its standing for the next election. The PD will first face critical regional elections in the historical socialist strongholds of Emilia-Romagna and Umbria in November — areas where Salvini's League has been successfully drumming up support.

“If Salvini wins in Emilia-Romagna, the PD will melt like a snowflake the very next day,” Cacciari said.

The PD has been struggling to provide a convincing answer to Italy's migrant question, leaving the door open to a strident Salvini, who has wooed voters by closing the ports to charity ships rescuing people from the Mediterranean.

The tie-up with the M5S also risks alienating those of its members disgusted by the Movement's kowtowing to the hard right.

“A combination of weakness within the PD and the profound differences with 5-Star will not bring anything good to Italy or the party,” former industry minister Carlo Calenda said on Wednesday as he quit the PD in disgust.

Some fear that Renzi — who has ruled out a role in the new government — is preparing to betray the PD by splitting the party in the coming months in a power grab. The former boy scout leader has form in Machiavellian manoeuverings: after taking over the PD in 2013 he pushed out its number two Enrico Letta, who was prime minister at the time. The now notorious tweet he sent before the coup, reassuring Letta with the hashtag “#Enricostaisereno” ('don't worry Enrico'), became synonymous in Italy with back-stabbing.

'Not in good health'

The party initially blossomed under the boyish former mayor of Florence, winning 40 percent of votes at the 2014 EU elections and inspiring the entire European left.

But Renzi was soon accused of being an arrogant and authoritarian leader who favoured and trusted only a chosen few. In 2016 Italians rejected his ambitious reform plans and he resigned, first as prime minister then as party leader.

He may now be a simple senator, but he still has 3.4 million Twitter followers, compared with Zingaretti's 453,000. Zingaretti, well known in Italy as the brother of the actor who plays famed television detective Inspector Montalbano, has posited himself as the man to bring unity to the fractured party. His biggest challenge, however, may lie not with party politics but with ordinary Italians.

“The problem is that Italians continue to believe in right-wing ideas,” political science professor Lorenzo Castellani from Rome's Luiss university told AFP, adding that the left was “not in good health”. The PD-M5S tie-up risks creating a dangerous division between ordinary Italians and the country's institutions, he said.