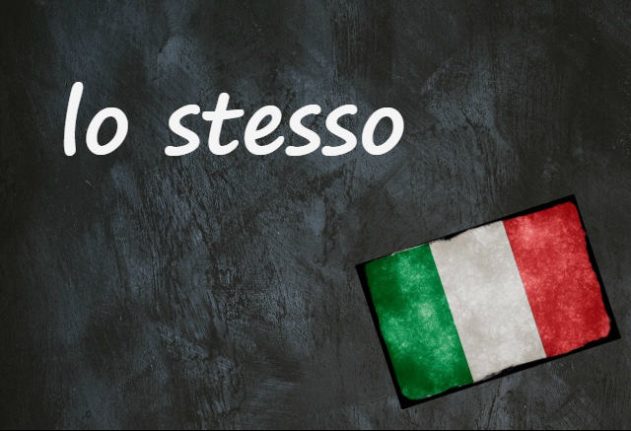 One of the Italian phrases you'll probably use every day in Italy is lo stesso. It’s one of those extremely useful expressions that you’ll get plenty of wear out of.

Lo stesso means “the same”, and there’s quite a lot you should know about this apparently simple phrase.

Here's the simplest way to use it:

– We were born on the same day

– It wouldn't be the same without you

Lo stesso can also be used to mean “anyway” or “all the same”, the meaning changing slightly depending on context.

– We would’ve found it just the same without him

– per me fa lo stesso

Or you could say per me è uguale. Uguale, which usefully sounds a lot like “equal”, is a frequently-used synonym of lo stesso.

– Which do you prefer?

You will often hear Italians ask if something would be va bene lo stesso, literally meaning “ok all the same”. For example:

While lo stesso if often used on its own, when it refers to a noun you may need to use the feminine or plural forms.

– The same thing happens every day

– She used exactly the same words

And you might be wondering why the definitive article here is “lo” instead of “il”. After all, isn’t “lo” used for masculine nouns beginning with a Z or Y?

“Lo” is also used for masculine nouns beginning with s + consonant, like lo stesso (and for quite a few other things too.)

That little “lo” is important, and you can’t drop it. You’ll also come across stesso with a reflexive prounoun instead, for example: me stesso, ti stesso, se stesso (myself, yourself, itself), etc.

– I can't forgive myself

– She only thinks of herself

Check out a few more of the most useful Italian words you need to know.