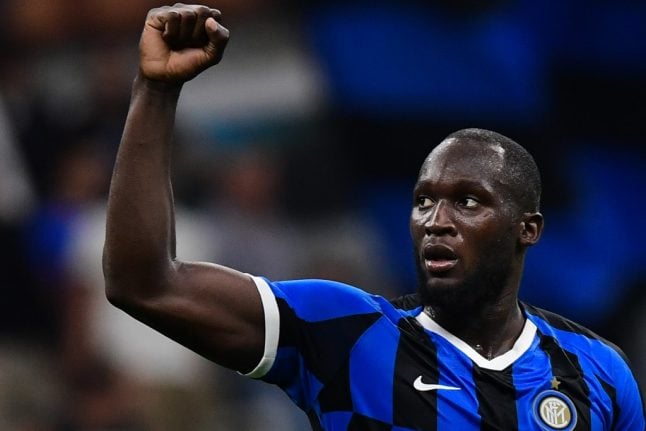 Lukaku — Inter Milan's new €65 million recruit from Manchester United — was targeted by monkey chants from a section of the home crowd during Sunday's Serie A game at Cagliari. The abuse lasted for several seconds as the 26-year-old was preparing to take the winning penalty in Inter's 2-1 Serie A triumph at Cagliari.

But Inter's fan group L'Urlo della Nord told the forward in an open letter published on their Facebook page that he was seeing racism where there was none.

“Hi Romelu. We are really sorry you thought that what happened in Cagliari was racist,” the fans wrote.

“In Italy we use some 'ways' only to 'help our teams' and to try to make our opponents nervous, not for racism but to mess them up.

“We are a multi-ethnic fans organisation and we have always welcomed players from everywhere. However, we have always used that 'way' with other teams' players in the past and we probably will in the future.

“We are not racist and so are not the Cagliari fans,” continued the letter from the Curva Nord group — which has no official affiliation with Inter. The group is a section of the club's hardcore support that sit in the north stand of Inter's San Siro stadium.

The Sardinian club on Monday moved to “strongly distance” themselves “from the isolated but nevertheless reprehensible events that took place in the Sardegna Arena”.

On Monday, Lukaku called on players, clubs and federations to unite and take a stand.

“Ladies and gentlemen it's 2019, instead of going forward we're going backwards and I think as players we need to unify and make a statement on this matter to keep this game clean and enjoyable for everyone.”

But Inter's hardcore fans said Lukaku was seeing racism where there was none.

“Please consider this attitude of Italian fans as a form of respect for the fact they are afraid of you for the goals you might score against their teams and not because they hate you or they are racist,” the letter read. “You have to understand that in all Italian stadiums people cheer for their teams but at the same time they jeer opponents not for racism but to 'help' their own team.

“True racism is a completely different story and all Italian football fans know it very well. When you declare that racism is a problem to be fought in Italy you just help the repression against all football fans including us and you contribute to create a problem that is not really there, not in the way that is perceived in other countries.

“Please help us to clarify what racism really is and that Italian fans are not racist.” Racist chanting has dogged Italian stadia in recent years, with Italy striker Moise Kean also the victim of similar abuse — alongside teammate Blaise Matuidi — at Cagliari after he scored a goal there for his former team Juventus last April.

Kalidou Koulibaly was showered with monkey chants last season by Lukaku's new fans at the San Siro, while several other black players have been targeted.