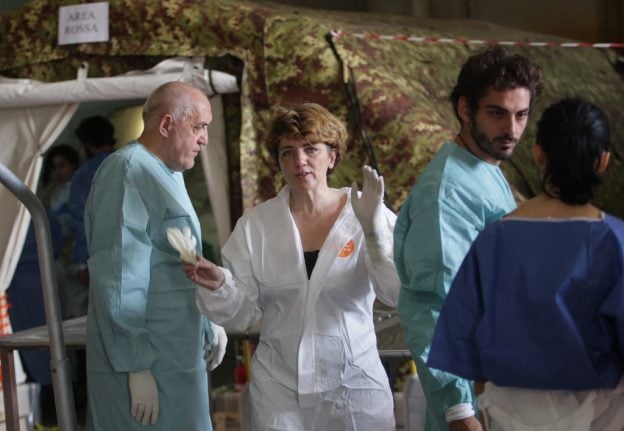 “The dead need to be identified — not for the dead, they are lost, but for the living. People need to bury and identify and grieve their dead,” Cattaneo, an Italian forensic pathologist, told AFP in an interview.

Since 2013, the laboratory she heads at the University of Milan has been waging a lonely fight to piece together a life from the photos or love letters, school reports and bits of clothing carried by migrants who have drowned trying to cross the Mediterranean to Europe.

Many younger victims from Eritrea and Sub-Saharan Africa, in particular, she said, also tuck away small pouches of soil from their homelands — just like the leaves and flowers that Cattaneo herself stashed away on summer trips back to Italy after moving to Canada as a child.

“I was putting them in my pocket to remind me of the place I loved,” she said. “If people could see what these adolescents had in their pockets, they would understand that they are actually us.” Personal effects of victims gathered at a military base in Sicily in November 2015. Photo: Marcello Paternostro/AFP

The catalyst for Cattaneo's mission was a series of deadly shipwrecks starting in 2013, including the capsizing of a boat off the island of Lampedusa in October of that year that killed more than 360 people, mostly Eritreans. Eighteen months later the Barcone, carrying at least 800 people, foundered after it collided with a Portuguese cargo ship that had raced to its rescue.

Cattaneo was called in to help on that disaster as part of an effort to create a European database where DNA and other distinguishing features could be catalogued, allowing relatives in other EU countries or back home to find their dead.

Italy's government later paid €9.5 million to recover the sunken ship and transport it to the NATO base at Melilli in Sicily in June 2016. But so far her team's painstaking work has secured funding only from a handful of universities and religious foundations, as well as a banking foundation, which has slowed progress.

They have obtained DNA samples from 528 victims of the Barcone who have since been buried, and a collection of 20,000 bones, but names have been established for only 40.

“A lot of work still has to be done, but it proves that they can be identified,” Cattaneo told AFP. Since 2014, the International Organization for Migration says on its website that more than 14,000 migrants have died in the Mediterranean, while the UN refugee agency puts the number of dead and missing at more than 18,500.

Cattaneo is urging other European nations and institutions to step up with the money and expertise to bolster the identification effort. “Europe is the only one who has the tools and the capacity to solve this issue, and also the duty — it's a question of human rights,” she said.

The chances of securing EU funding appear slim, however, with member states at loggerheads over how to share the burden of processing the new arrivals and helping those who are allowed to stay build new lives.

For the families of loved ones lost in the Mediterranean crossings, a death certificate can provide a sense of closure. But Cattaneo says the certificates can also be critical for proving a death and obtaining financial assistance, especially for widows. They can also help reunite the orphans of victims with living next of kin.

Over 300 families have come forward hoping to learn if their relatives were on the Barcone, often with the assistance of international Red Cross offices across Africa.

“They are still coming, this is just the beginning,” Cattaneo said. “When we identified the first two people of the Barcone at the beginning of the year… it was a bit like giving back something that has been taken away from those families.” Cattaneo recently published in Italy an account of her work and also a call to action, titled Naufraghi senza volto (The Faceless Drowned), and a French translation came out this month.

“We really would need governments to acknowledge the problem and then have centres and hotspots [in Europe and Africa] where relatives who are looking for their dead can come and give the information,” she said.

“Even if this work is on someone who is dead, we see that our work has done some good and has a purpose.”