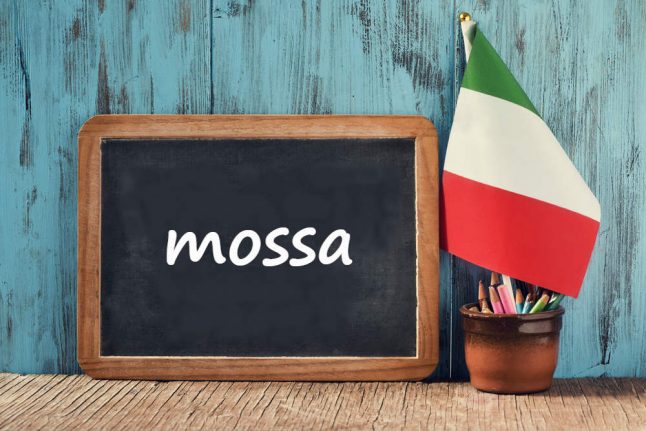 I first heard this word at the Palio di Siena, the historic and hair-raising Tuscan horse race, where la mossa was being discussed all around me. But I had no idea what it meant until I saw it happening.

One of the most traditional and highly-anticipated parts of this famous event, it happens right before the race itself begins, when one of the riders makes a false start – perhaps suddenly changing direction, or stalling – apparently to put the others on the back foot.

– You were supposed to watch her every move

But at the palio it’s used figurately to mean a sort of staged movement or trick. (And there’s an art to la mossa, plus lots of rules on performing it correctly.)

And the term mossa can be a bit confusing, as it’s used frequently, often figuratively, and with varying shades of meaning.

The dictionary definition that might describe the Palio’s mossa is probably this one:

Literally “it’s all a move”: understood to mean that something is fake or staged.

Literally to “make a nice move”: meaning to act in such a way as to achieve a purpose for one's own benefit.

But just as with the word “move” in English, there are countless ways to use mossa and it can get very confusing for non-native Italian speakers.

However, some phrases do translate very easily.

Much like in English, fare una mossa falsa, or to make a false move, means to do something careless that endangers the final result of your endeavour,

And you can also say fare la prima mossa, or “make the first move”, which means to start a game (such as chess) or take the initiative in something.

And datti una mossa simply means “get a move on”.

Be aware that mosso/a can also be used as an adjective, for example to describe wine – in this case, it means that the wine is gently sparkling, or “moving”.

And the diminutive mossetta can be used to talk about anything from hand gestures to dance moves.

– Don’t make fun of me with those hand gestures.