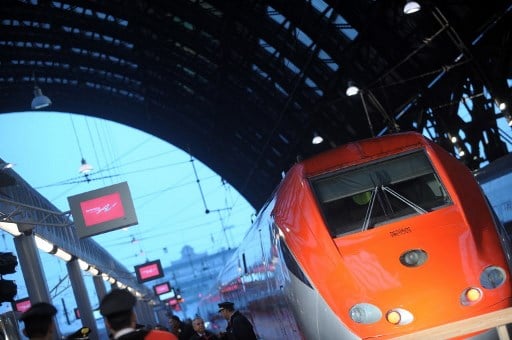 Whether you live in Italy or are just visiting, you'll probably use the country's railways sooner or later.

Italian trains are mostly modern, clean and comfortable, and sometimes they're fast, too. Not to mention that taking the train is greener and can save you a lot of driving-related headaches. Knowing a few things about italy's railways before you go will make your journey easier, and probably cheaper.

So to get you started on your journey, here are a few things I've learned after spending a few years travelling up and down the country by train.

Is train travel a good option in Italy?

Most people seem to think so. And I would agree – I love travelling by train here.

Although, as with so many things in Italy, it all depends on where you are – and what you're doing.

You can easily hop between most large cities using high-speed rail or intercity services. I've travelled around Italy on tight schedules for work or to reach airports with no problems.

If you're doing a Rome-Florence-Venice trip, or visiting Bologna, Milan, or Turin, it's absolutely ideal.

However, there are large parts of the country, particularly in the south, with minimal services and outdated infrastructure.

Italy is still expanding its high-speed rail network, and sadly, cars remain the most popular mode of transportation among Italians partly because public transport is often lacking.

Still, even when Italian train travel isn't exactly efficient it's usually still very scenic, and in these areas it's a great way to get around if you're on holiday and have time to spare.

There are several different options. If you're travelling between cities, Italy's high-speed trains are the best choice.

These are run by Italo and Le Frecce, which is part of national operator Trenitalia. Both companies' high-speed trains are modern, clean and comfortable, and on some stretches they reach speeds of 300 km/h.

Frecciarossa trains are the fastest and cover the high speed Turin-Naples line, running through Milan, Bologna, Florence, Arezzo, and Rome. Frecciargento and Frecciabianca run on both high-speed and traditional lines, reaching Verona and Venice, as well as Puglia and Calabria, at slightly slower speeds. Italo trains are very similar and run on routes throughout the country. As they're run by a private company you can't get tickets on the Trenitalia website and must check the Italo website separately.

Be warned that on any of Italy's high-speed trains the wifi and air conditioning is very much prone to malfunctioning.

Italo trains, in my experience, are usually more punctual, less crowded, and have a little bit more luggage space. But the price and service is more or less the same.

For short journeys, or if you have more time to spare, you can use the regular regionale trains, also operated by Trenitalia. There’s no need to plan in advance on these trains, as prices are set.

Regionale trains travel shorter distances, within a single region or two neighbouring ones.

Look out for the local stopping services which will take you on a long tour of every small town and village in the region. This can be quite fun if you're on holiday and want to see the scenery, but less so if you have an appointment in the city and have accidentally boarded the wrong train!

Intercity services travel longer distances, for example between Rome and Bologna. While they're not as fast as high-speed trains – usually taking twice as long – they are not a bad option and are about half the price. You can travel right across the country this way, from north to south, and even to Sicily. In fact, going to Sicily by train is an experience, as it includes a ferry ride – the train itself goes into the ferry.

I personally prefer taking regionale and intercity trains whenever possible. They've always been clean and comfortable, and rarely crowded outside of peak times. These routes also have some of the very best views.

How expensive is train travel in Italy?

Unfortunately, it can be comparable to the UK's sky-high rail ticket prices, especially if you travel at peak times and/or use high-speed services.

Of course, the high speed services are much more expensive than regional trains. Expect to pay around 90-100€ for a one-way ticket from Milan-Rome, and around 40€ for an hour-long journey such as Florence-Rome. The solution is to book well in advance (at least three weeks) and travel at off-peak times. Avoid weekends and public holidays. This way prices are a lot more reasonable, and occasionally you might find a bargain.

Frecce and Italo tickets include booking and are non-exchangeable and non-refundable. If booking online, you can print out your ticket or just show inspectors the barcode sent via email on your smartphone.

On regional trains, the prices are set, so there's no need to book ahead (although you can if you like.) You'll need to validate tickets before you travel by stamping in one of the machines found on station platforms.

No. At least not always, and no more so than trains in the UK.

While five or ten minute delays are pretty common, major delays thankfully are not.

But when they happen, serious delays can cause total chaos.

If you need to change trains on your journey, just make sure you leave yourself plenty of transfer time.

Some stations, such as Bologna, are quite large and confusing. Others, like Florence, are always very crowded. So bear in mind that transfers might take longer than you expect.

It's also worth knowing that it can be a long walk down platforms to reach your allocated carriage on high-speed trains. Le Frecce trains also close their doors one minute before the scheduled departure time.

And many stations (Rome Termini, I'm looking at you) often only announce the platform five minutes before the train is scheduled to depart, causing a mad rush and then, usually, a delay. Do they actually check your train tickets in Italy?

Yes – usually. At larger stations, including Rome Termini and Florence Santa Maria Novella, there are electronic barriers and you can't access the platforms without a ticket (electronic or paper.)

On short journeys on regional trains you might have your ticket checked four times, or not at all.

On high-speed trains you'll have an allocated seat and the inspector will check that you're sat in it. (On intercity trains you can also reserve a seat if you choose.)

Are trains safe in Italy?

Yes. Accidents are thankfully rare. As for crime, trains in Italy are generally busy, well staffed, and well lit. The areas around train stations can be dodgy, particularly late at night, but it's enough to take the same basic safety precautions you would anywhere else.

The biggest (but still not very big) risk is having a bag stolen. Trenitalia says it's the passenger's responsibility to keep an eye on luggage, even if it's stowed at the end of the train car. There is, however, insurance against bag theft that applies to most Trenitalia passengers.

How much luggage can I take?

Travelling by train in Italy is a good incentive to pack light. Techically you can bring as much luggage as you want. There's no fee. However, there's also very little storage space on most trains, and putting bags on or around seats is not an option on busy high-speed services. On high-speed trains, there are storage areas for large suitcases at one end of each train car. But there are often many more bags than will fit in this limited space.

On many trains, the only real storage is overhead shelves above the seats and these are too small for big suitcases. Sometimes there is room to stow smaller suitcases and bags in the space created when two seats are situated back-to-back.

If you're travelling on Frecce trains and have lots of bags, there is a door-to-door service, Bagaglio Facile, for sending your bags instead of lugging them around yourself. The costs start at €20 for the first bag and €15 for the second. It's available to all Frecce train passengers.

What else do I need to know?

It bears repeating that you must remember to stamp your ticket before boarding your train, using one of the machines on or near the platform at the station.

And once on board, the best thing to do is seek out the restaurant car and grab yourself a coffee, sit back, and enjoy the view.

Siena and a steam train ride through wine country

All aboard Italy's 'Trans-Siberian' railway