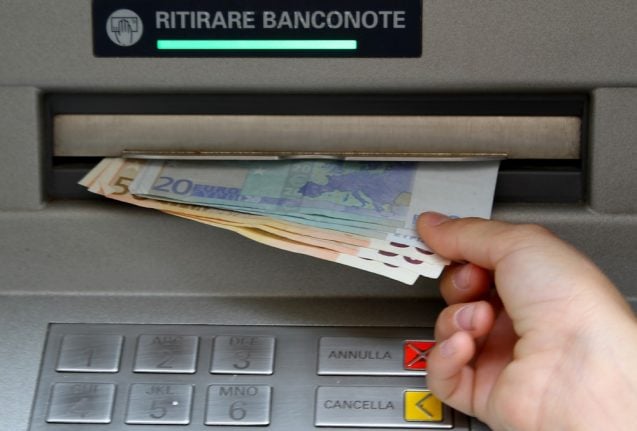 Italy’s government is currently drafting a new fiscal decree as part of its 2020 budget plan which could see everything from flights to fizzy drinks cost more for ordinary Italians.

Prime Minister Guiseppe Conte had initially said a clampdown on tax-dodging by companies and CEOs would be the focal point of next year’s fiscal plan, hoping to bring in €800 million to €1 billion euros back into public coffers.

But numerous Italian newspapers are reporting on other eye-catching tax hikes that are also being drafted:

This rather radical idea would see consumers get tax credits for settling their debts electronically while fining others who withdraw above a certain amount of cash every month.

The aim is to discourage cash payments as part of the new tax evasion measures, with Italy’s underground economy thought to account for more than 12 percent of country’s GDP. Conte has tried to appease critics by stating that he would also drastically reduce the expense of electronic transactions.

Italy has a tax evasion rate of about 30 percent, one of the highest in Europe, although companies and CEOs rank among the biggest tax dodgers, with an evasion rate almost 19 times higher than that of employees.

E-cigarettes and other smoking

According to Rome newspaper Il Messaggero, government tax-collecting agency Equitalia has revealed that all types of smoking – traditional cigarettes, electronic cigarettes and heated tobacco – will soon all be subject to tax.

A previous draft law aimed at taxing e-cigarettes in 2013 was described as a scam and shelved as a result of its unpopularity among shop owners and smokers. A tax on alternative forms of smoking was introduced in the 2018 budget but dropped in May 2019. Italy will follow the World Health Organization’s advice and start taxing fizzy drinks to try to curb sugar consumption among its population, with similar measures in other countries having proven successful in reducing obesity.

“Prepackaged” breakfast and other snack-style foods will also be slapped with a new tax if recommendations by Italy’s Education Minister are brought into law.

Far-right populist Matteo Salvini was quick to mock the draft measure by tweeting that “croissants, tarts and bonbons should hide away, a tax on snacks is on its way.”

Spurred on by the current growth in global consciousness vis-à-vis air travel pollution, Italy’s government is discussing the possibility of adopting a new green deal that would see taxes on flights to and from Italy rise.

The figure isn’t high however: €1 for national flights and €1.50 for international trips, part of a series of “micro-tax interventions” on consumption “that are damaging for public health and the environment”, a tax that could add an extra €2 billion to public funds.