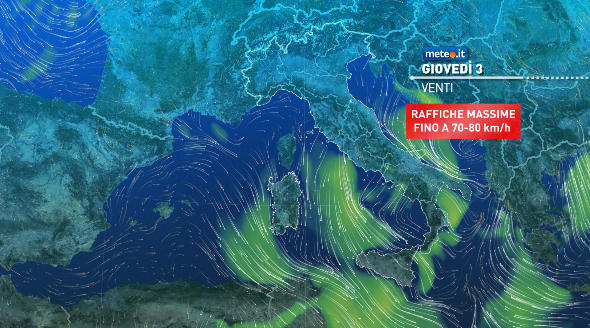 Hig winds are forecast in the south. Image: Ilmeteo.it

Winds could reach up to 70-80 kilomtres per hour on Thursday, according to weather reports.

There was rain in many northern regions at the beginning of the week, while many parts of the south saw thunderstorms and rain overnight on Wednesday as temperatures started to drop.
There will also be a significant drop in temperatures across the southern half of the country. ilmeteo.it said, warning that winds may be expecially strong on the Adriatic coast today.
After enjoying mild and sunny weather earlier this week, with temperatures reaching around 26 degrees celsius, high temperatures are expected to drop by 8-10 degrees across most of Italy.
Rain is expected in much of the south on Friday and Saturday, Ilmeteo warned, as well as more bad weather thanks to “a new disturbancecaused by remnants of the tropical cyclone Lorenzo, which will cross our southern regions very briefly on Saturday.”