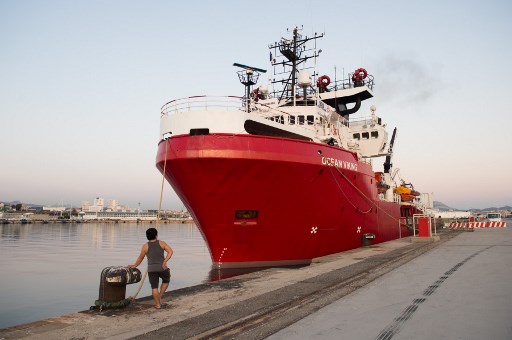 “We are relieved that the 176 survivors can disembark in a safe place without unnecessary waiting,” the organisation said in a tweet.

“We are currently heading north,” towards Taranto, it added.

The Ocean Viking ship, operated by the NGOs SOS Mediterranee and Doctors Without Borders, picked up the migrants from inflatable boats in two operations off the coast of Libya.

They include four pregnant women and at least nine people aged under 16.

Earlier on Monday, it had asked EU member countries to assign it a port where the migrants could disembark.

“No site in Libya can currently be considered safe” for migrants, SOS Mediterranee it had said in a statement.

SOS Mediterranee said it was the fourth time it had asked for access to an EU port since August, shortly after relaunching rescue operations following a seven-month hiatus it blamed on obstruction by European nations.

Earlier this year, Italy's previous government's “closed ports” policy repeatedly left rescued people stranded on board cramped ships off the Italian coast for periods of up to 19 days, while it argued with other EU nations about which country should take the migrants in.

The Ocean Viking's appeal for help comes as European leaders struggle to agree on how to jointly handle the thousands of people trying to reach the continent from Africa.

Last month Italy, France, Germany, and Malta proposed a system for automatically distributing asylum seekers across the EU, but so far only a handful of other nations have backed the plan.

“Ad hoc accords cannot be the solution. We are calling on governments to put an end to an unacceptable situation,” said Fabienne Lassalle, a deputy director at SOS Mediterranee France.