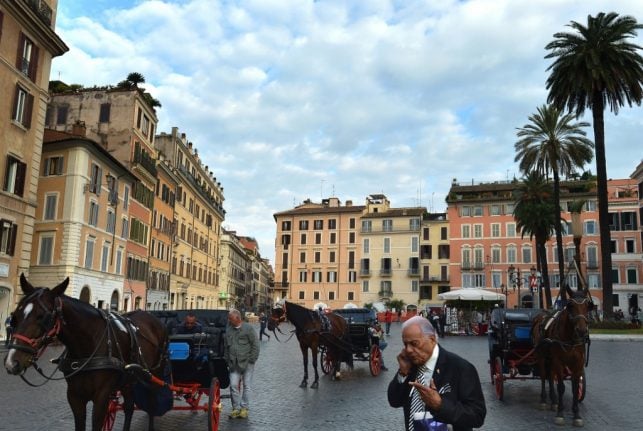 'Botticelle' horse-drawn carriages are still a common sight on the streets of Rome, despite the passing of a law aimed at banning them. Photo: Alberto Pizzoli/AFP

Shoppers in Rome were horrified last week when a horse collapsed on the central Via dei Condotti while hauling a botticella, a tourist carriage.

Instead of taking the horse out of service and having a veterinarian perform a health assessment, the driver callously continued on, business as usual.

It's hard to reconcile this vibrant city with the old-school mindset that horses can be treated as nothing more than vehicles. These rides are a throwback to a time before the streets were filled with impatient drivers, speeding taxis, and fleets of buses.

But times have changed, and it's time for the carriages to go. This was far from an isolated incident. In 2012, a horse collapsed in the sweltering summer heat, and the driver was seen beating the stricken animal before police officers intervened.

A few years earlier, a horse named Legoli was killed after being hit by a car, and another died after falling down.

Horrific incidents aside, the daily grind for horses is debilitating and cruel. Pounding the pavement while hauling heavy loads takes a considerable toll on their legs, hooves, backs, and lungs, and they can develop serious respiratory ailments as a result of breathing in exhaust fumes.

Heat exhaustion can be life-threatening. And carriage drivers often fail to respond appropriately when their horses are struggling, either because they don't acknowledge the animals' distress or because they're unwilling to lose a few days' work to allow them to rest and heal.

Public safety is also a serious concern. Wherever these rides are permitted, accidents occur, often resulting in property damage, serious injury to both horses and humans, and even death.

Horses startle easily and are extremely sensitive to loud and unexpected noises, which are common on busy city streets. A pneumatic drill or even a car horn can be enough to cause a horse to bolt.

A measure intended to take horse-drawn carriages off Rome's streets and confine them to parks was supposed to take effect earlier this year. While this partial ban doesn't go far enough to protect horses, it would be a good start – yet it still hasn't been implemented.

It's time for officials to do away with cruel and dangerous botticelle altogether. The drivers can be retrained as taxi drivers, and the horses can enjoy the “retirement” they deserve.

In the meantime, anyone who cares about animals should refuse to go for a botticella ride and instead opt for humane, animal-free entertainment – and there's plenty of that to be found in Rome.

Gessica Zorz is an Italian activist for People for the Ethical Treatment of Animals (PETA).

ROME
Two hospitalised as wildfire breaks out near Rome
Url copied to clipboard!