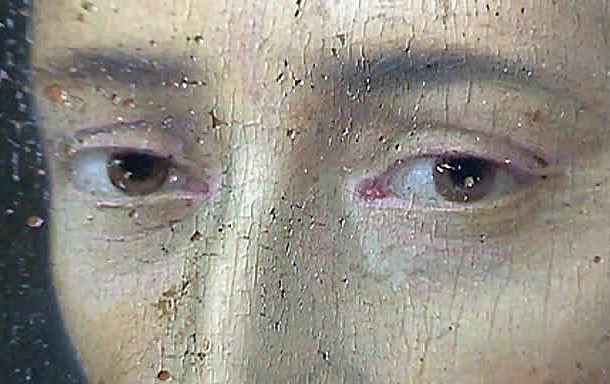 A letter written 145 years ago and discovered last year suggests the work could be the likeness of 15th-16th century Italian philosopher Niccolo Machiavelli, painted by none other than Renaissance master Leonardo da Vinci.

Several months of tests lie ahead to establish the painting's subject and provenance, but Sylvie Giroux, director of the Chateau de Valencay in central France, says it is “not impossible” that it will prove to be a link between two of history's most famous men.

The castle housing the artwork once belonged to Charles-Maurice de Talleyrand-Perigord, a pre-eminent diplomat known simply as Talleyrand who died in 1838.

Last year, a document dated 1874 and signed by Talleyrand's chamberlain was unearthed in an archive, mentioning a Machiavelli portrait on wood measuring 55 by 42 centimetres (22 by 17 inches) painted by Leonardo. The discovery unleashed a treasure hunt among Talleyrand's vast art collection, leading to a possible match hidden away in a castle storeroom.

The sombre portrait is of an unsmiling man with a long, thin face, sharp nose and pointed beard, dressed in a black coat, white shirt and necktie.

“Just because it says so in the archives does not mean it's true” that this is a likeness of Machiavelli painted by Leonardo, cautioned Anne Gerardot of the local archives office.

Gerardot, who has been researching the matter for more than a year, said the painting's attribution to Leonardo may well be the result of “a gradual shift from supposition to affirmation”.

Several months of high-tech tests will seek to determine whether the work is by Leonardo's hand, virtually stripping it back layer by layer.

Gerardot believes the person in the portrait bears a much closer resemblance to 16th-century French philosopher Michel de Montaigne than to Machiavelli.

Another reason for caution: the painting's wooden support appears to be too smooth to have come from Leonardo's time, although restoration work carried out on the painting in Berlin in the 1890s may explain this apparent inconsistency.

If the painting is authenticated, however, it will serve as proof that Machiavelli and Leonardo had met in person.

The buzz over the painting comes after a major Leonardo da Vinci exhibition opened at the Louvre in Paris last week to mark 500 years since his death — 12 years before that of Machiavelli.