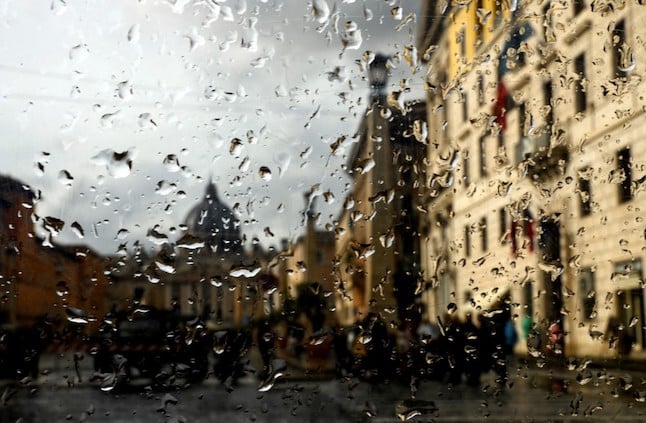 Rome in the rain: Roads were closed in the capital today after heavy rainfall. Photo: Filippo Monteforte/AFP

The regions of Basilicata, Calabria and Sicily were put on maximum alert as fierce winds, rain, hail, thunderstorms and rough seas lashed the south.

A lower orange alert was issued in Puglia, where violent hailstorms in Salento damaged crops, while swathes of central and northern Italy were on yellow alert.

The rough weather is expected to continue throughout Monday and most of Tuesday, with Italy's Civil Protection Department warning the public to steer clear of roads by the coast or next to rivers, and to beware falling trees.

Several towns kept schools closed on Monday and many more announced closures for Tuesday, including Catania, Reggio Calabria and Brindisi. Floods by the Rome's Colosseum in 2011. The capital has had heavy rain again today. Photo: Vincenzo Pinto/AFP

Most of Italy is braced for several days of bad weather: storms are forecast from north to south on Tuesday, before concentrating over central and northern Italy by the end of the week. In Venice, where high tides reached over a metre on Sunday, the 'acqua alta' is expected to surge as high as 155 centimetres on Tuesday morning – making flooding likely in large parts of the city, including St Mark's Square.

Meanwhile heavy snowfall is forecast in the Alps throughout the week at 1,000 metres and over.

The disturbance is due to a cyclone sweeping through the Mediterranean from northern Africa towards southern Europe, meteorologists say. It is heading for the west coast of Italy, bringing with it intense precipitation.