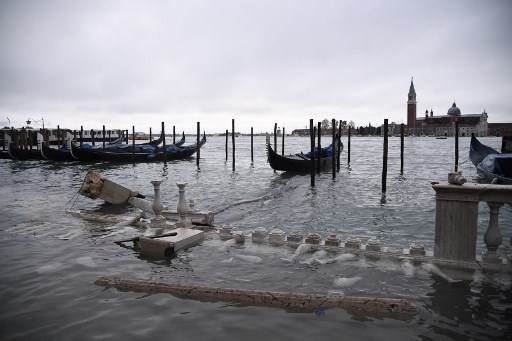 Walter Mutti lives and works in Venice as a newspaper man at a classic Venetian kiosk. He gets up early and sells newspapers on the Fondamenta delle Zattere.

He’s been doing this work for 25 years; as with many Venetians it’s a job he inherited from his father – a family business, and one he loved.

In Italy, especially, a neighbourhood’s kiosk can be its own little world, a place where locals can leave parcels, a place for a chat.

For tourists the newspaper stand is itself an iconic object. If you’ve ever been to Venice you’ll have seen the beautiful deep-green triangular designs spotted around the city, doors open, lined with newspapers and magazines from around the world, a healthy stock of postcards, and if you’re lucky a snack or two and tickets for the public transport systems.

On the evening of November 12, Mutti had seen the predictions for the acqua alta. He had also noticed the steady jumps as those predictions increased over the course of the afternoon, first from 140cm to 150cm and then later to 160cm. As the waters rose, he soon realised this was no usual high tide. A shopkeeper bailing out floodwater as the tide rose on Tuesday night. Photo: AFP

The Fondamenta delle Zattere lies along Venice’s southern edge, it looks out across the canal, unsheltered by buildings or streets, an uninterrupted view from Venice’s main island to the island of Giudecca. By the evening, waves were making their way across the canal, the rising waters – which eventually reached 187cm – pushed by 100mph winds straight into the kiosk.

Standing inside, Mutti recalled feeling how the stainless steel construction was “trembling” under the pressure from the waves and winds. “For a moment I thought it would fly away,” he recalls.

Fleeing at around 11:30pm, he tweeted “I'm fine I managed to get out just right I'm in pieces.”

Moments later: “The flooring must have given way.”

Mutti contacted the Carabinieri and fire brigade. But swallowed by the rising waters, the kiosk has still not been found.

The devastation that occurs in the wake of such a high acqua alta is hard to capture. Once the spectacular pictures disappear from social media life seems to resume, but for locals the damp lingers.

Like many, Mutti found himself out of work, albeit in a more dramatic way. While others cleaned out hundreds, sometimes thousands of euros' worth of ruined produce and goods, Mutti just stood on the one remaining part of what had been his livelihood: a concrete bar.

The flooring, the walls that would have surrounded him, had all disappeared, ripped from their foundations.

Moved by what he had seen, Mutti’s friend, Carlo Gardan, set up a Go Fund Me page to raise money for the newspaper vendor. He declared his concern for Mutti’s business not merely as a friend, but reflected on the importance of the kiosk as a centre for society at large. Mutti's kiosk just before it was swept away by floodwaters. Photo: Walter Mutti/Twitter

“I’m a strong supporter of newsstands, which for years have been important for the community” he wrote. “We support the Venetians and their work. Venice is not just buildings and canals.”

It seems Gardan is not alone in his views: within hours hundreds of donations had come pouring in, anonymous and named, big and small.

By the next morning the petition had already surpassed the half-way point of its target to raise 25000 euros – a target it has now exceeded. “It's amazing what you can do with social media.” Gardan tweeted.

The generosity and kindness of strangers always surprises. It’s the one bright light that's shone throughout this time in Venice. Neighbours helping neighbours, the countless shout-outs on social media from friends who live on the mainland offering a helping hand for anyone in need.

Chaos makes people work together; though it's often reported that Venice's local community is being reduced in size due to tourism, it's a truth that no matter how small it may be the community here has never been stronger.

Mutti met Italy’s Prime Minister Giuseppe Conte yesterday morning along with other residents of the city, and used his time to make the politician consider those even less fortunate who need help, saying: “I’ve lost my job, but there are so many others who have lost everything.”
A lot can be achieved when people band together, and the restoration of Mutti’s kiosk is symbolic of the strength and determination of the Venetian community to rebuild all that has been destroyed – no matter how small.

Follow all of The Local's latest news from Venice here.