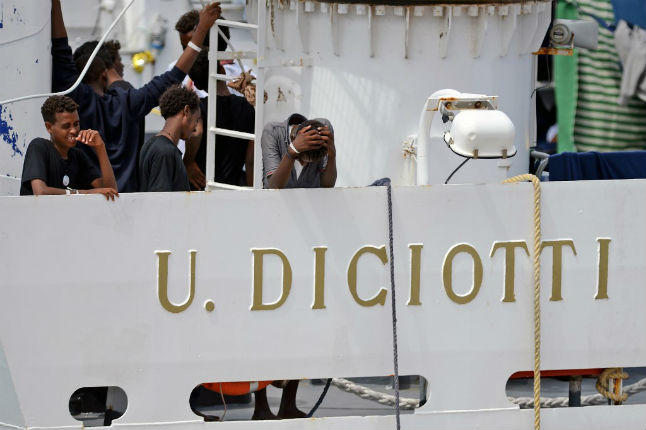 Migrants wait on board the Italian Coast Guard vessel U. Diciotti during a previous rescue in September. Photo: Giovanni Isolini/AFP
“The crews of four patrols rescued 143 people who had fallen into the sea” from a ten-metre boat, the coast guard said in a statement.
Survivors said that around 20 of those who had been on the boat were missing.
Two men, an Eritrean and a Libyan, said they had been unable to locate their wives following the rescue.
A search for those missing continued on Saturday evening with two planes from Frontex — the border and coast guard agency for the EU's Schengen area — and the Italian navy flying over the area.
Police were also searching the Lampedusa coast to see if any of the migrants had managed to swim ashore.
Those rescued were taken to Lampedusa where they were allowed to disembark.
Meanwhile, Italy, Germany, France and Malta jointly asked the European Commission to activate a migrant-relocation scheme for 213 migrants on board the Ocean Viking rescue ship, the Foreign Affairs Ministry said.
“This is the first time this has happened” since the signing of a pre-agreement for the automatic distribution of rescued migrants in the Mediterranean concluded in September in Malta by four EU countries (France,
Germany, Malta and Italy).
The Ocean Viking, chartered by SOS Mediterranee with Doctors Without Borders, has rescued 215 people in three operations in recent days. One injured man and a pregnant woman had already been taken off the boat.