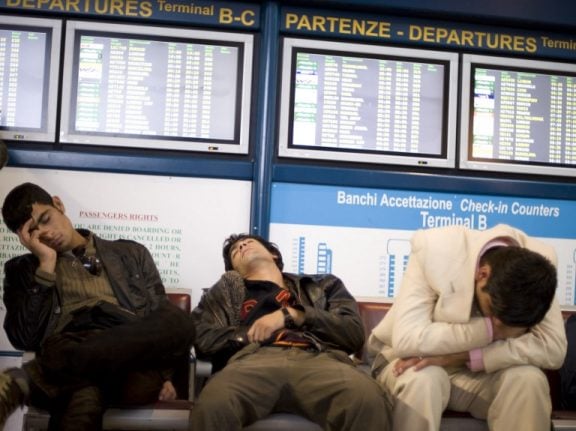 Italian national carrier Alitalia has grounded a total of 137 flights and rescheduled many more on Monday November 25th due to a four-hour strike called by several unions representing airport and airline workers, including air traffic controllers.

The strike action from 1-5pm on Monday afternoon means most flights will be unable to take off or land at Italian airports with air traffic control unavailable during that time, striking airport workers said

Passengers on any airline travelling through Italian airports are warned to expect delays and potential cancellations. Unions stated that the strikes were due to “the continuation of the Alitalia crisis and the regulation of the sector.”

One air traffic control worker, speaking anonymously to The Local, said they were striking because staff cuts mean working conditions in some control towers have become unsafe.

The strike was originally set to last for 24 hours, but The Local understands this was deemed unconstitutional by the Transport Ministry. Alitalia stated that it was “forced to cancel some connections, both national and international” due to the strike action and provided a full list of affected flights on its website.

Around 40 percent of passengers are not expected to be able to travel on Monday as planned, according to Alitalia.

The company said it was using larger aircraft on domestic and international routes on Monday in an attempt to limit the number of cancellations.

Passengers were advised to check the status of their flight before going to the airport.

Alitalia stated: “Passengers who purchased an Alitalia ticket to travel on November 25th, in the event of cancellation or modification of the flight schedule, can change the reservation free of charge or ask for a refund (only if the flight has been cancelled or delayed for more than five hours) until December 2nd.

Another strike by the entire aviation sector has already been announced for December 13th.