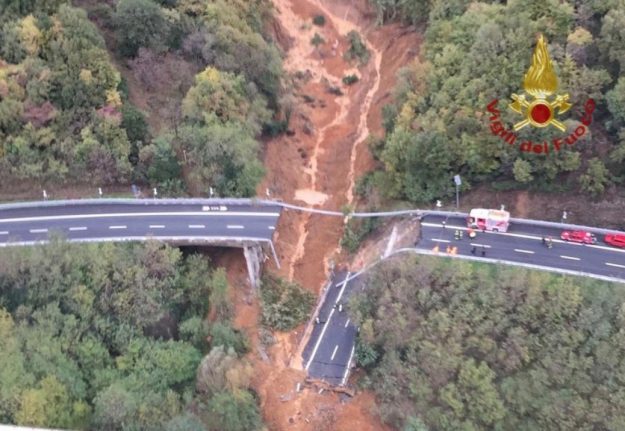 The collapsed section of the bridge near Savona. Photo: Vigili del Fuoco

Torrential downpours also soaked many parts of Italy, sweeping away part of a motorway viaduct and leaving one woman missing, the latest in a two-week wave of extreme weather in the area.

Venice was again plunged under water after extreme flooding earlier this month.

Part of a viaduct serving the A6 motorway near Savona in the northern region of Liguria running between Turin and France was washed away by what a severe mudslide, firefighters said, leaving a 30-metre gap in the road.

Although the emergency services did not immediately find any victims at the site, sniffer dogs and helicopters were checking the area to make sure.

Pictures of the damage brought back memories of the 2018 collapse of the Morandi bridge at Genoa, only 50 kilometres (30 miles) away, which claimed 43 lives after it coollapsed during bad weather.

Victims of the Genoa tragedy demanded action from the government on Monday, saying Sunday's motorway bridge collapse “was like going back 15 months for us.”

“It was only thanks to pure chance and immense luck that more innocent people did not die,” said Egle Possetti, the president of a committee devoted to the memory of the victims of the Morandi disaster.

“We want a serious commitment from our government and from parliament so that our country is made safe and every trip does not become a game of Russian roulette”, he told te Ansa news agency.

READ ALSO: Did Italian authorities know Genoa's Morandi Bridge was at risk of collapse?
In the Piedmont region, a 52-year-old woman was missing after her car was swept away when a river burst its banks. Local media reported that two other people in the car managed to get out of the car in time.

The worst hit region in Italy was Alessandria, south of Turin, where 200 people were evacuated and 600 left isolated. One woman was reported missing, Italian media said.

Another 500 people were evacuated further north in the Aosta Valley, where roads were closed because of the risk of avalanches.

On the east coast, Venice was again hit by the acqua alta, or tidal flooding, once again after severe flooding earlier this month.

The flooding paralysed the city again, even if the levels were far below the historic peak reached on November 12. The waters that flooded the St Mark's Square in the city centre were at knee-height, and were beginning to recede by the afternoon.

The latest floods came as environmental activists staged a demonstration protesting the city's inadequate flood protection programme and calling for an end to the massive cruise ships that visit the historic city.

Venice's mayor has said the damage of the flooding earlier in the month could amount to one million euros, blaming the near-record water level rise on climate change.