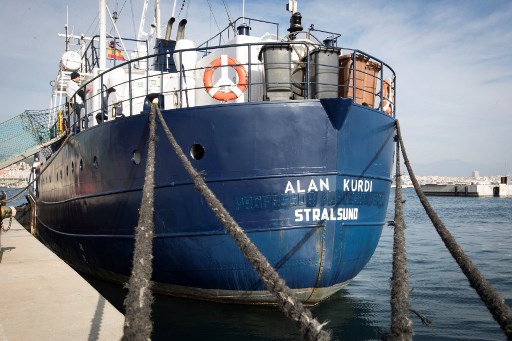 “The European Commission has started the procedure of distributing the 61 migrants on the Alan Kurdi and the 60 aboard the Ocean Viking,” the ministry said in a statement.

“Some European countries, including Germany and France, have offered to accommodate some of these migrants,” it said.

German charity Sea-Eye's Alan Kurdi – named after a Syrian child whose drowning in the Mediterranean in 2015 brought global attention to the migrant crisis will dock in the Sicilian port of Messina while the Ocean Viking of SOS Mediterranean will put in at Pozzallo, also in Sicily.

BREAKING: Relief as, late last night, Italian maritime authorities notified #OceanViking that the rescued people onboard had been granted #Pozzallo as a Place of Safety. 60 survivors rescued on Thursday will disembark this morning. pic.twitter.com/1T7SpST3De

Rome gave the green light thanks to a temporary system agreed in September with France, Germany, Italy and Malta.

The deal was meant to end the long, drawn-out negotiations that have seen vulnerable asylum-seekers including babies stranded at sea, sometimes for weeks.

Since it was commissioned in summer 2018, the Alan Kurdi has saved nearly 500 people shipwrecked in the Mediterranean, including more than 80 picked up in the recent days, according to Sea-Eye.

On November 28 the Ocean Viking rescued 60 migrants, including 19 minors, who were on a flimsy wooden boat.