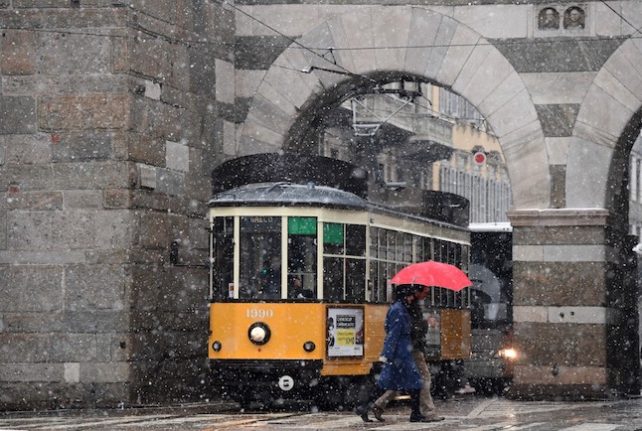 Dubbed “Santa Lucia's storm” after the Sicilian saint celebrated on December 13th, the bad weather is forecast to cause disruption for up to 36 hours. The mayors of Rome and Naples ordered schools and parks to stay closed on Friday amid strong winds and heavy rain in the south-west.

Traffic was backed up in the capital as drains overflowed and roads filled with water. Mayor Virginia Raggi urged residents to avoid travel if possible and use the streets with caution.

Further north Milan had its first snow of the winter, with authorities asking residents to leave their cars at home and salt the street outside their homes.

Flakes also fell over Turin, where global warming activist Greta Thunberg is due to hold a 'climate strike' on Friday afternoon.

While snow in the cities was relatively light, there was heavier snowfall across the Alps, including over Lake Como.

Flakes were reported as far as Tuscany, where the areas hit by an earthquake earlier this week saw snow and freezing rain, and there were warnings of snow in Florence. The region also issued an alert for strong winds and rough seas on the coast.

Italy's Civil Protection Department warned of gale-force winds the length of southern and central Italy, with Puglia and Calabria worst hit. Forecasters warned of winds of around 100 kilometres per hour on the most exposed parts of the coast and waves up to six metres high.

The bad weather is expected to continue into Saturday, but relent by Sunday.