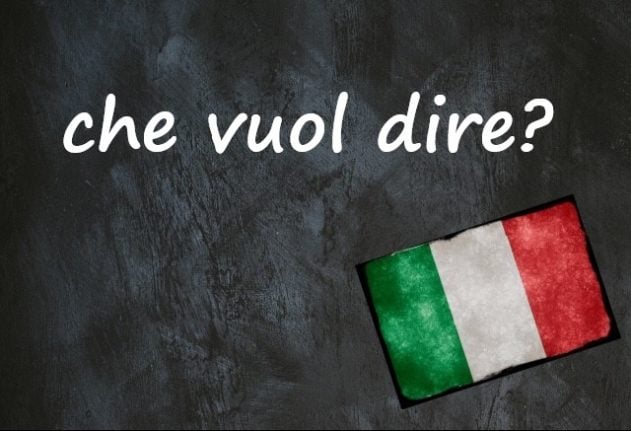 I'm not calling my Italian in-laws argumentative, but let's just say there's no such thing as polite chit-chat at their dinner table. Everything is a topic for debate.

That's how I learned today's phrase: from my Italian father-in-law, repeatedly demanding “che vuol dire?” while waving a forkful of spaghetti around, as I looked blankly at him across the table.

Who wants to say what? I wondered.

Vuol(e) dire literally means “wants to say”. And so che vuol dire may seem to mean: “what does it want to say?”

But, as I soon figured out, what that really means is: “what does that mean?”

When asking the meaning of words in Italian class, you'll no doubt have learned:

– What does it mean?

And che vuol dire can be used in much the same way.

– This word means… (literally “this word wants to say…”)

You might also hear cosa vuol dire which, as far as I can tell, means the same as che vuol dire.

My father-in-law however wasn't asking for clarification on the meaning of a phrase. He understood perfectly well. But he disagreed with it. In this case, the meaning becomes: “What do they mean by that?” or “what are you trying to say?”

The meaning of che vuol dire can shift a little depending on context.

– That's what being an adult is all about

When preceded by the article “il” the phrase becomes “which means”, for example:

– This is a code red, which means…

Switch it around, and vuol dire che is especially useful when clarifying meaning.

– It doesn't mean you're a failure

– What Jim means is that we're happy for you

So next time an Italian demands to know what you mean, at least you won't be left wondering: “what does that mean?”

See our entire Word of the Day archive here. Do you have an Italian word you'd like us to feature? If so, please email us with your suggestion