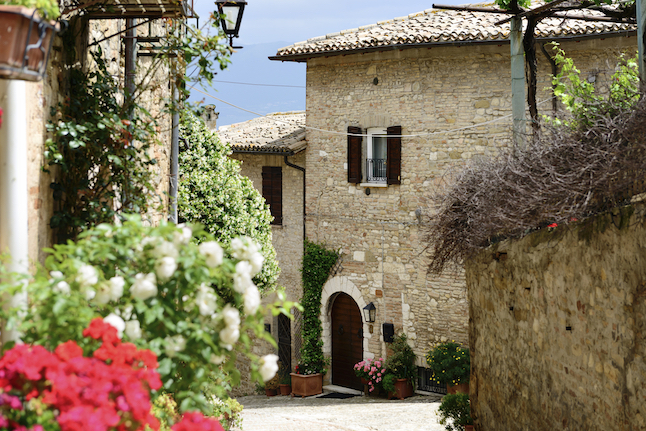 There's no shortage of quaint villages to visit in Italy. Photo: DepositPhotos

This month I will enter my seventh year in Italy, my ninth over two stints, and not a calendar gets tossed without me discovering new hidden hideaways I’d never heard or read about. It might be while driving along a rural road in Lazio’s wine country or taking a boat through Lake Como, trying to decide in which lakeside villa to spend the night.

You know you want to visit in 2020. You realize, of course, there will be about 50 million others who will visit Italy this year. Yes, there is a way to get away from them.

This Italy Off-the-Beaten-Path List is compiled mostly from places I visited in 2019. I also threw in a couple of old favourites I rediscovered when I closed my eyes and dreamed of my glorious past few years here.

In alphabetical order (since making a top-ten list is like listing my ten favourite gelato flavours), here are my top ten underrated towns in Italy for 2020.

The town isn’t much. It’s merely a small municipality. However, it’s the perfect jumping-off point for Parco Nazionale dei Monti Sibillini, a little-known national park that borders the underrated regions of central-eastern Italy.

It is 70,000 hectares of green meadows bridging mountains in the Apennine mountain range, including 1,647-metre Monte Guaidone which looms over the area. Or go to the town of Norcia, 24 km away, which boasts the best sausage in Italy and is in the process of recovering from the 2016 earthquake.

READ ALSO: After the earthquakes, why you should still visit central Italy

This is my favourite find of 2019 and one of my best discoveries in Italy. This tiny village, situated 35 km east of Rome at 800 metres and high above the emerald Valle del Sacco, is an easy day trip from the capital but you should spend the night to grasp the heartbeat of rural Italy.

It’s a collection of alleys and narrow roads all leading to a small central piazza and with great views of the valley below. The 18th-century San Pietro Apostolo with its statues of capuchin monks anchors a small square. In 2017 the town was listed among the Most Beautiful Villages of Italy and 100 top destinations of Italy. It has come a long way since post-World War II when Italian directors flocked there to film the ruined village as a raw example of Italy’s economic despair. Since then it has become a beacon for Italian films with photos adorning the town walls where scenes were shot. One includes 'Pane, Amore e Fantasia' ('Bread, Love and Dreams'), the 1953 breakout film of Gina Lollobrigida.

Have a cheap glass of wine at an outside table at Al Cafe' then go around the corner to Ristorante Gasbarri for some of the most authentic Roman cuisine in Lazio.

Coming to Rome in July and August? Don’t. It’s hot and crowded. But if you must, come to Fregene on July weekdays or early in the day in August. It’s my favourite quick beach getaway, just 30 km west of Rome. We often drive early and park free in the back lot of Il Capanno dei Pescatori, one of a number of outstanding seafood restaurants along the beach. It has semi-elegant outdoor seating in the sand with terrific seafood pasta dishes and fresh fish at affordable prices you can’t get in Rome. Parking is free if you rent the restaurant’s lounge chairs for about €7 on a spotless, sandy beach along a clean Tyrrhenian Sea.

READ ALSO: These are the best beaches within easy reach of Rome

Come on a weekday morning in June or September and you might have the place to yourself. Drive along the narrow roads lined with little beach bungalows and it may remind you of Venice — the one in California — without the schlocky souvenir stands.

But I came for the first time in August and shiny new buildings have replaced some of those that were destroyed. Corso Federico II, part of L’Aquila’s main drag, is lined with upscale shops. Piazza Duomo is again bustling with activity from lovers on a stroll to teens eating gelato in the shadow of the restored Duomo. Cranes still loomed over the piazza and many buildings remain shells. A hole is all that remains of a dormitory where several university students were killed. It now serves as a memorial with signs, photographs and gifts left along a fence.

But what attracted intrepid travellers to L’Aquila before is bringing them back again. It’s a pretty city, with a cool climate at the base of the Apennine mountains and restaurants slinging underrated Abruzzese wine and cuisine. Go down and stroll the tree-lined streets, then go to the piazza and enter the Chiesa di Santa Maria di Suffragio, where you can read the names of the quake victims on a plaque.

At the southern end of Lombardy on the Emilia-Romagna border, Mantua is too often skipped past on people’s way to Milan or Verona.

While mainstream American tourists don’t know it, European culture vultures do. In 2008, Mantua’s old town was declared a Unesco World Heritage Site. In 2016, it was named the Italian Capital of Culture and in 2017 part of the European Region of Gastronomy.

READ ALSO: Mantua, the Renaissance city of the Gonzagas What makes Mantua so special? It’s at the confluence of three 12th century artificial lakes, making it feel as if you are on the sea even though you’re 130 km inland. The influence of the Gonzaga family, which ruled Mantua from 1328-1708, made Mantua a centre for culture, art and music.

The many palazzos and piazzas attracted numerous artists, including Peter Paul Rubens, who boasted the Duke of Mantua as his patron.

Want a unique Italian wine experience? Set up camp here. It’s in Umbria, one of Italy’s most underrated wine regions where its signature Sagrantino wine is making inroads around the world. In Italy the Sagrantino grape is grown only in Umbria and the area around Montefalco boasts dozens of wineries. Rent a car, cruise around and meet winemakers in uncrowded tasting rooms.

READ ALSO: 'In the US you could never do this': How an American opened his own Italian winery

Wine aside, Montefalco is a typical Umbrian town. It’s inside a 12th-century wall with narrow cobblestone streets leading to a main square anchored by a huge church. Chiesa di San Francesco features frescoes showing the life of St Francis, whose church in Assisi is only 30 km to the north. If your budget permits, stay at the Villa Pambuffetti, a four-star palace in the midst of 8,000 square metres of gardens. Inside the town walls, dine at Olevm (Latin for “oil”) where they serve a mean chicken in Sagrantino sauce.

This is part of Castelli Romani, a string of towns in the Alban Hills southeast of Rome. At 500 metres' elevation it offers a cool respite from Rome’s summer heat.

It is famous for two things: its strawberries are among the sweetest in Europe, much more delicious than what you get in the stores. Half the businesses in the town seem to sell strawberry tarts, strawberry pies, strawberry gelato and strawberries, period.

It’s also famous for Lake Nemi, a volcanic crater lake that provides some of the best views in Italy. Stroll along Nemi’s narrow main drag and see the lake below, as still as glass and just as clear. Walk down the path 10 minutes for a closer look, or go to the banks and dine at one of the restaurants. The lake has quite a history. In 300 BC it was the site of a sprawling temple dedicated to Diana, the goddess of the hunt, that attracted pilgrims from all over the Italian peninsula. Later, Emperor Caligula built luxurious barges to host banquets on the lake. Mussolini had them salvaged but, alas, the boats were destroyed by fire in 1944. The remnants are displayed today in a dedicated museum.

If you’re into architecture, come here. It’s part of the Baroque Triangle in south-east Sicily. Noto, along with Ragusa and Modica, are dripping with the Sicilian Baroque style that surfaced in the 17th century to show off the Catholic Church’s massive wealth.

I went through all three and Noto is the most scenic. The area has made a remarkable comeback from a powerful 1693 earthquake that killed 60,000 people and devastated entire towns. It was rebuilt in the Baroque style and has attracted art historians for centuries. However, few tourists bother coming here. Walk through the giant archway and stroll down the pedestrian-only Corso Vittorio Emanuele. It’s lined with churches and palaces in the garish (or gorgeous, depending on your perspective) architecture: lots of gold domes, wide staircases and huge churches such as the church of San Domenico and San Nicolò Cathedral.

Take a seat at one of the many outdoor trattorias and dig into my favourite regional cuisine in Italy, heavy on seafood and delicious desserts. Then go shop for ceramics with traditional Sicilian designs.

Maybe it’s a stretch to list a city of 165,000 people as off the beaten path. But this beautiful, hilltop walled city, only 160 km north of Rome, is often overlooked on the Rome-Florence-Venice tourist pilgrimage. It’s in the heart of Umbria, another underrated region. You enter Perugia via escalator and walkway through a string of long, dark tunnels known as the Rocca Paolina, built as a fortress in the 1540s. They spit you out onto grand Piazza della Repubblica where Corso Vannucci leads you past Palazzo dei Priori, a Gothic palace holding the city’s main art gallery. Continue down the street to San Lorenzo, a medieval cathedral that overlooks the main Piazza IV Novembre.

READ ALSO: Five other great places to visit near Perugia

Sightsee during the day; party at night. Perugia is one of Italy’s main university towns and the city is brimming with happening pubs, bars and cafes. Take little Via delle Streghe off Vannucci and try typical Umbrian cuisine such as cinghiale (wild boar) and tartufi (truffles) at La Taverna, an elegant, moderately priced restaurant with terrific food and atmosphere.

OK, the world knows Lake Como. The world does not know Varenna. It’s on the east side of the lake, looking over Bellagio. Nor do people know that Varenna battles Bellagio for the title of prettiest town on the lake. Varenna gets my vote. A collection of pastel-coloured buildings hugging the lake greets you as Como’s public boat motors into the small port.

Varenna doesn’t get the crowds. I found myself alone walking down a path lined with palm trees and bougainvillea, with tall cliffs on one side and on the other water so clear I could see fish below the surface. In July and August, Lake Como is also warm enough to swim.

John Henderson is an American writer living in Rome. This is an edited version of an article that was originally published on his blog, Dog-Eared Passport.

Want to write a guest blog for The Local Italy? Get in touch at [email protected].