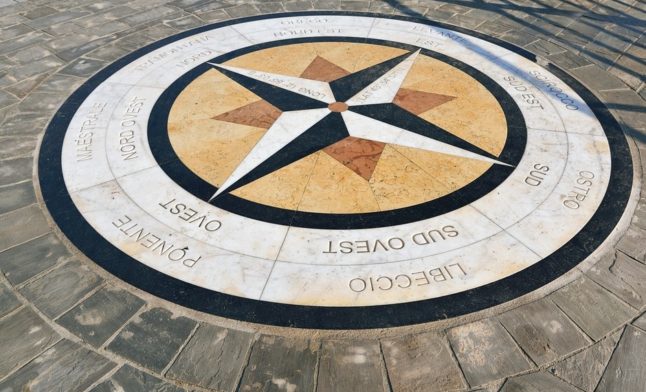 The well-worn stereotypes about the north and south persist, both within the country and abroad.

If these stereotypes are to be believed, people are rich and reserved in the industrial north, while the south is friendly but impoverished and chaotic. But how close to the truth is this?

READ ALSO: Why Italy's south is better than the north

Anyone who's spent time at both ends of the country will probably agree that there are huge regional differences – though of course, things are more complex and nuanced than the regional cliches would have us believe.

Some differences are simply down to the fact that Italy's north has a stronger economy, while others are historical or cultural. After all, southern Italy actually was until relatively recently a completely different country; ruled by the Spanish for three centuries, and remaining a separate kingdom until the unification of Italy in 1860. 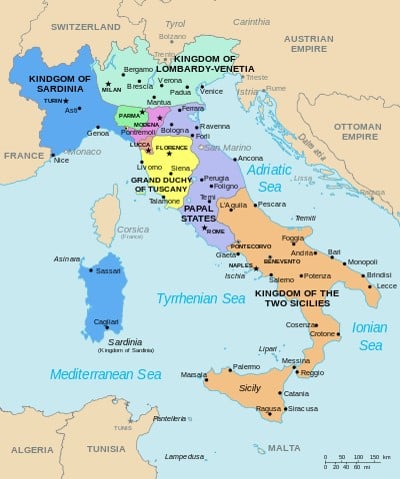 To demonstrate the differences – and similarities – that exist today, here's a selection of more modern maps explaining Italy's north-south divide.

Unsurprisingly, studies show that the average salary is higher in the north of Italy than in the south. And, as this map shows, the difference is quite a big one – salaries are almost four thousand euros higher on average in the north compared to the south and islands. 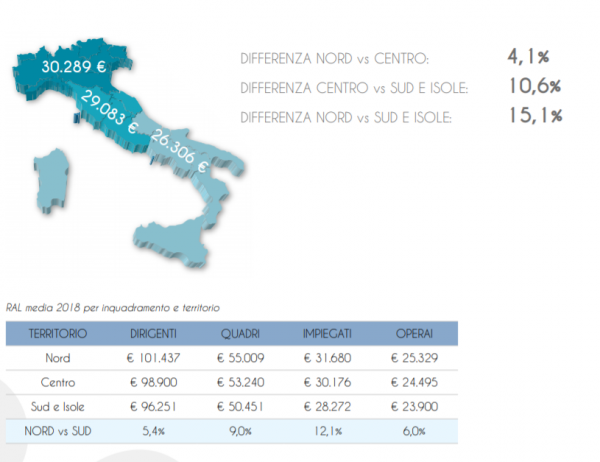 There's a clear north-south party divide among Italian voters. As the map below shows, the anti-establishment Five Star Movement is most popular in the south, while the anti-immigrant League (formerly the Northern League) enjoys most of its support across the north and centre of the country.

The area around Emilia-Romagna in the centre-north of Italy, known for traditionally having a large number of left-wing voters, is now diminished, but the centre-left Partito Democratico still has a higher-than-average number of supporters in that area.

Are there more road accidents in the north or the south? The south (and one southern city in particular) may have a reputation for dangerous driving habits, but the most dangerous roads in the country are in fact found in the north. At least in terms of the frequency of traffic accidents.

However, the data, mapped by Italian newspaper Il Sole 24 Ore, also showed that road accidents in the south are more likely to be serious. 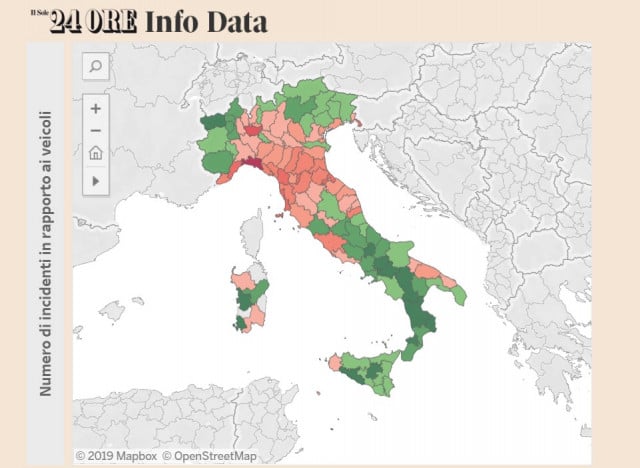 Use of local dialects

One of the more frustrating things about life in Italy for non-Italians is that, after spending years studying and practicing your Italian language skills, you find that a lot of Italians speak another language half of the time anyway. And sometimes that language, or dialect, doesn't sound much like Italian at all.

The use of local languages or dialects is generally more prevalent in the south – though there are exceptions to the rule, as this map shows. 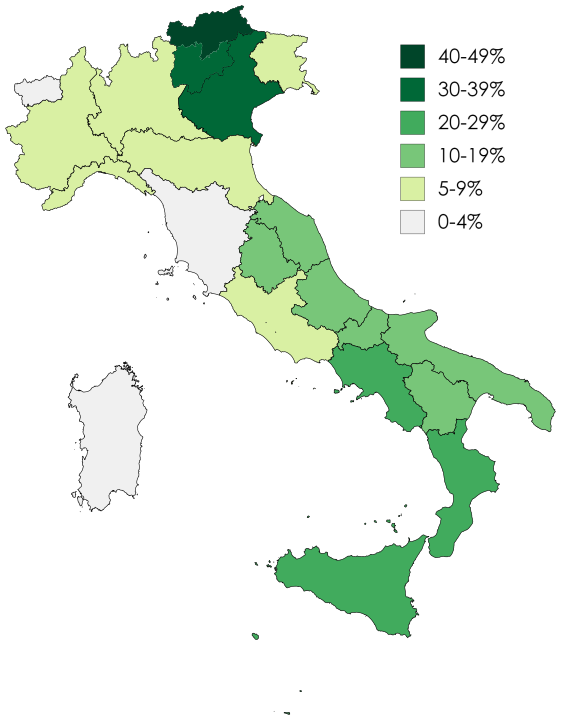 Map: based on Istat data via Wikimedia Commons/Underlying Ik

A study published in 2019 showed English language test scores in southern Italian regions were markedly worse than those in the north of the country (although the entire country scored relatively poorly overall.) 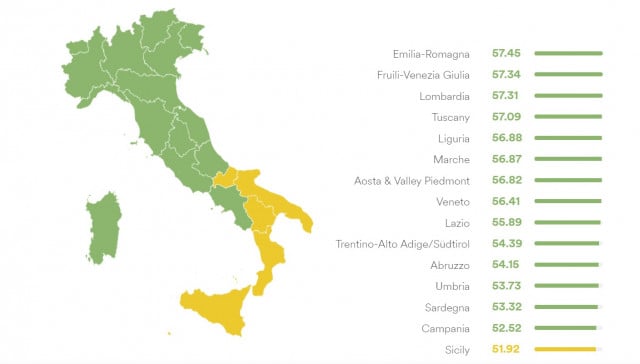 The latest ranking of the most popular baby names in Italy revealed another broad north-south divide: the most popular names given to children differ between (most) northern and (most) southern regions. 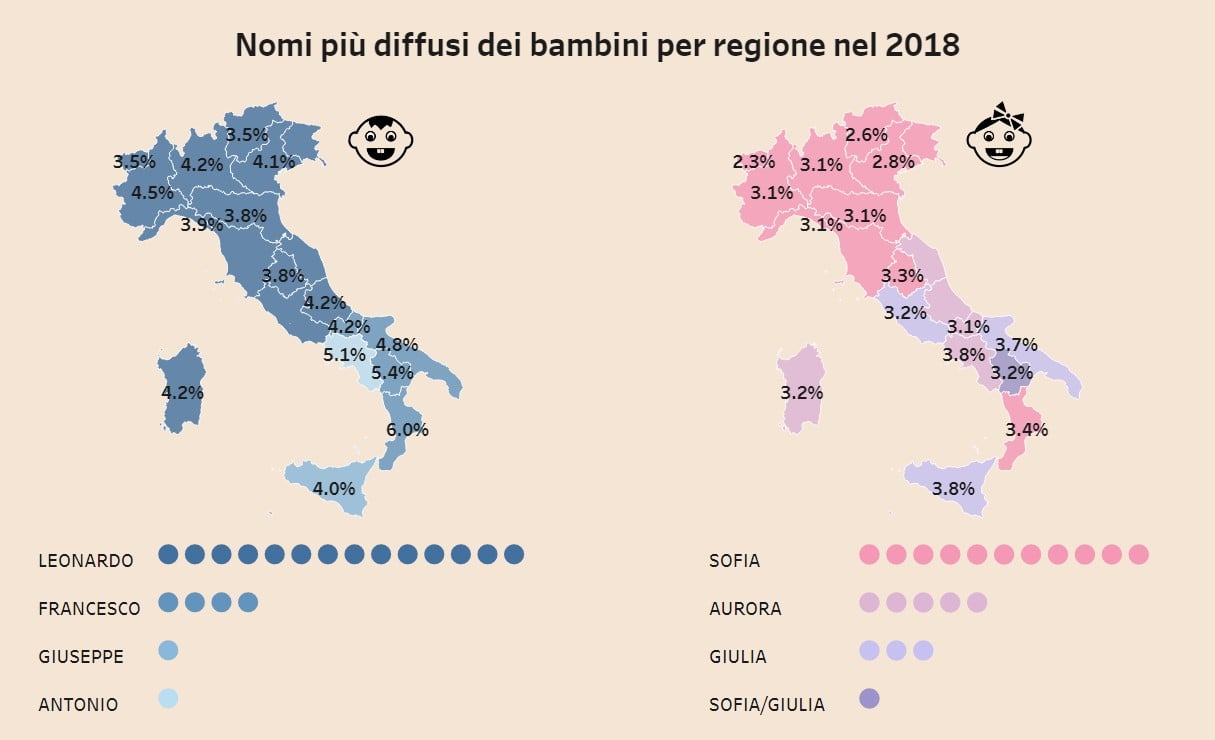 As anyone who's travelled around Italy will know, there are major culinary differences between the country's regions. One of the biggest differences you'll notice is that recipes from the north often call for butter, while it's always olive oil in the south.

This map below, from National Geographic's Tasting Italy, shows where the dividing lines lie – and that tomato-based sauces, too, are far more common in the south and islands. 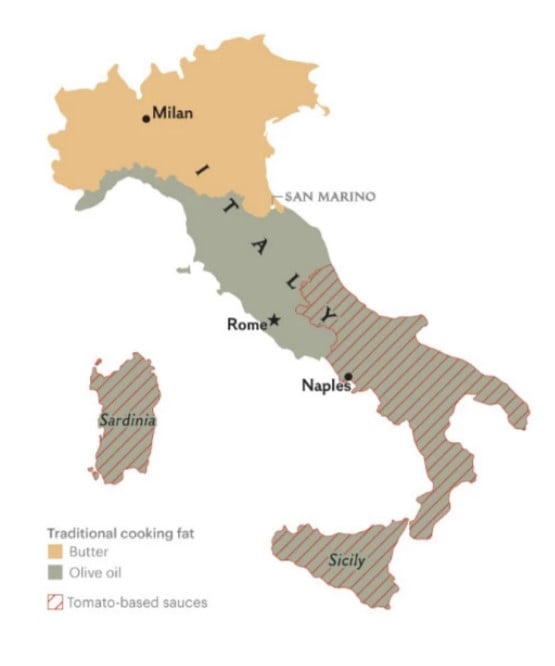 Italians aren't known for being big drinkers, famously sticking to just a glass or two of wine with lunch and dinner. But the number of people who drink outside of mealtimes varies greatly across the country.

As this map (based on Istat data from 2017) shows, the general rule is that the further north you go, the more people drink on average – and, stereotypically enough, that the inhabitants of the north/east drink more than everyone else.

In the southern region of Campania, only 31.6 percent of people said they ever drank alcohol other than at mealtimes, while the figure in Trentino Alto Adige was more than double, at 69.9 percent. 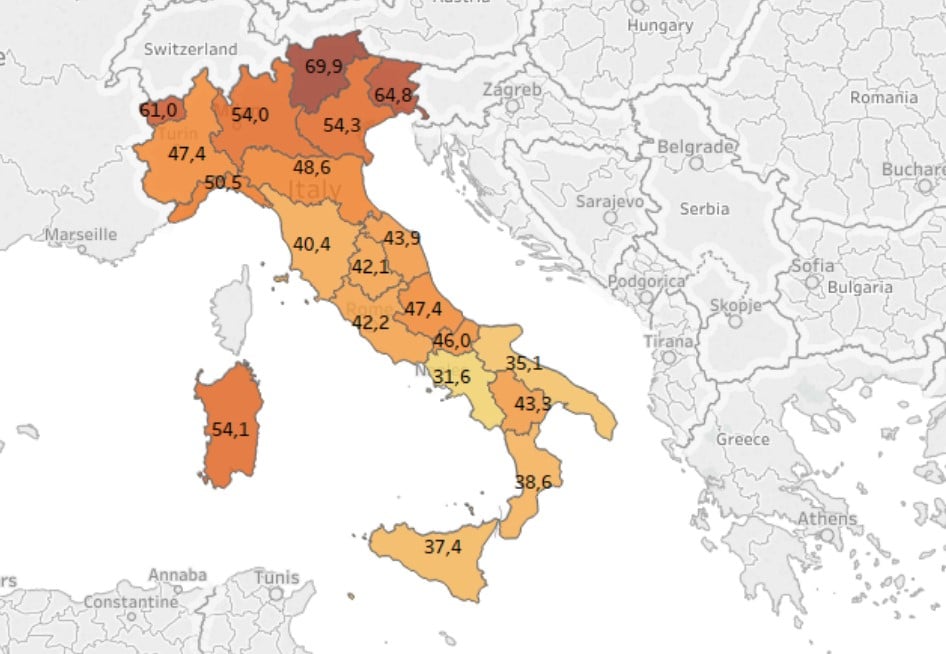 It's easier to find fast-food outlets in the north than the south. For example, this map of the locations of all the McDonalds' outlets in Italy shows they're fewer and further between in the south and islands.

Meanwhile, Domino's Pizza said recently that it aims to open more than 800 outlets in Italy – but no further south than Rome, as the US pizza chain says the south of the country is a more “challenging” market. 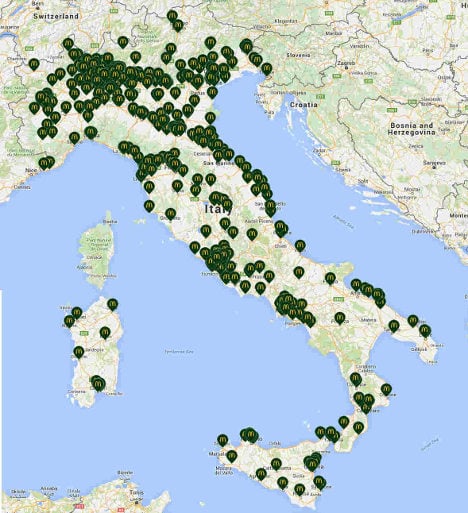