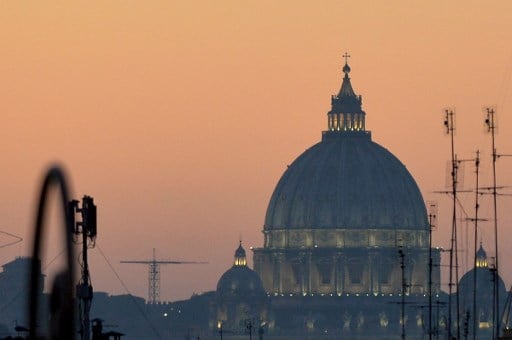 A haze over Saint Peter's Basilica in Rome. Photo: AFP

Rome extended its ban on diesel vehicles for a further two days on Wednesday 15 January and Thursday 16 January in attempts to curb pollution levels amid a “smog emergency.”

All diesel vehicles are banned within the city’s fascia verde (green belt), a limited traffic zone, during the busiest hours: 7.30am-10.30am and 4.30pm-8.30pm on both days.

City authorities stated that the measures was necessary to reduce high pollution levels which currently exceed the smog limit. Drivers of diesel vehicles caught by traffic police within the limited zone at these times face a potential fine.

The ban, first introduced on Tuesday 14 January, affects every classification of diesel vehicle – up to Euro-6, the least-polluting category.

Cities across Italy have been forced to ban hundreds of thousands of vehicles from the roads this week after days of persistent smog.

Milan's diesel vehicle ban, up to Euro 4, also remains in place from 08.30 until 18.30 on Saturdays, Sundays and holidays.

The alarm concerns levels of fine particle pollution known as PM10, which can be linked to respiratory disorders, allergies, poisoning and cancer.
Warm, windless weather has helped trap pollution and created what's been dubbed a 'smog emergency' across large parts of Italy, with dozens of towns reporting poorer than average air quality over the past fortnight.
READ ALSO: