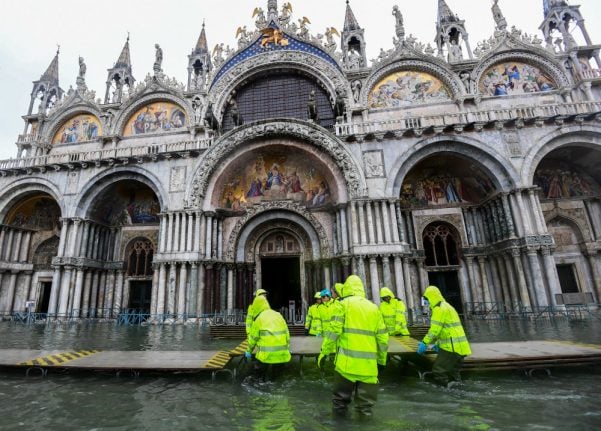 A 1.2 metre (four foot) high glass barrier has been suggested as a way to protect the world-famous monument and its priceless mosaics from the acqua alta, or tidal flooding, which happens regularly in the lagoon city.

The basilica's famous coloured marble and gold-leaf mosaics were swamped with sewage and the crypt left under a metre of corrosive salt water during the record flooding, which peaked at 1.87 metres (six feet) on 12 November 2019. Volunteers mopping up the mosaic floors inside the Basilica. Photo: AFP/ Marco Bertorello

The plan for the barrier, which would be built around the front of the basilica, has preliminary approval from city officials, Italian media reported.

The proposal now needs approval from the city's heritage authority and its public works committee before it can go ahead.

The cost of repairing the damage caused by November's exceptionally severe tidal flooding is estimated at €3m, but the regional government has approved just €1m in funding so far.

But officials in charge of the basilica have said the structure may not withstand flooding on that scale in future.

“The damage we can see now is nothing compared to that within the walls. The salt enters the marble, the bricks, everywhere,” said Carlo Alberto Tesserin, First Procurator of the Basilica, who is the president of a team responsible for managing the historic site.

“We said [in 2018] that the Basilica had aged 20 years in a high tide. It risks having aged much more than that in this one,” he told AFP following the floods in November. A protective glass wall around the basilica would be needed in addition to the planned Mose flood barriers, a controversial and long-delayed project still under construction in the lagoon.

The glass barrier “would replace the iron railings that already exist to keep visitors away from the external walls,” Pierpaolo Campostrini, also a Procurator of the Basilica, told Italian newspaper La Repubblica.

“It would be the third level of protection for the city, after the Mose for the lagoon, the 'Insulaè for the mudbanks and then at the monumental level.”

If the Mose system becomes operational and can “guarantee the most effective and efficient protection”, he said, “the glass panels can be easily removed.”

St Mark’s square is the lowest-lying part of Venice, and starts to flood when the acqua alta reaches 85cm. It is completely underwater at 100cm. However, the narthex of the basilica sits at an even lower point, and begins to flood at 66cm.

However, the stated plan for the Mose barriers is that they will be closed only when the water reaches 110cm above sea level, in order not to block the passage of container and cruise ships into the lagoon ports.

The city stands on wooden piles driven by their thousands into the mud, but rising sea levels and heavy cruise ship traffic have eaten away at the muddy foundations, leaving the gradually sinking city more vulnerable to the tides.