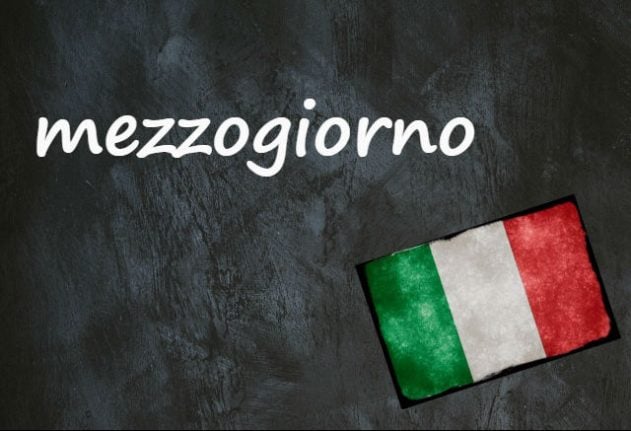 The word can be used to talk about midday, or noon:

– We eat lunch at noon

However, when Italians start using the word while talking about the weather, politics or geography, non-native speakers tend to get a bit lost.

Curiously, the south of Italy – basically everything south and east of Naples – is often referred to as the Mezzogiorno.

– The cities in the south of Italy

Sicily and Sardinia are often included in the Mezzogiorno, too. If you’re wondering why on earth Italians would describe half of their country as ‘midday’, the reason goes all the way back to the days of the Maritime Republics, or repubbliche marinare, in the middle ages.

Seafarers around the Mediterranean gave names to the winds coming from different directions to help them describe their routes, long before the days of the compass, when they couldn’t simply say ‘North’ or ‘South-east’.

The wind coming from the south was called ‘il Mezzogiorno’ because at midday the sun is seen in the south (or, as it was known long before there was a word for ‘south’, in the Meridione, or Meridian.) Still today, the south of Italy is also often called Meridione, while the north is still referred to as Settentrione.

All very interesting, sure, but is this useful? Actually, it is. These words might sound like some unnecessary thing that only a geography teacher would ever use, but in Italy you’ll hear them in weather reports and everyday conversations all the time.

Basically, Italians today are using this bit of old-school sailor lingo in everyday speech. Which I think is pretty cool.

So next time an Italian friend starts talking about il mezzogiorno while discussing some seemingly unrelated topic, you’ll know it’s not (just) because they’re really looking forward to lunchtime.