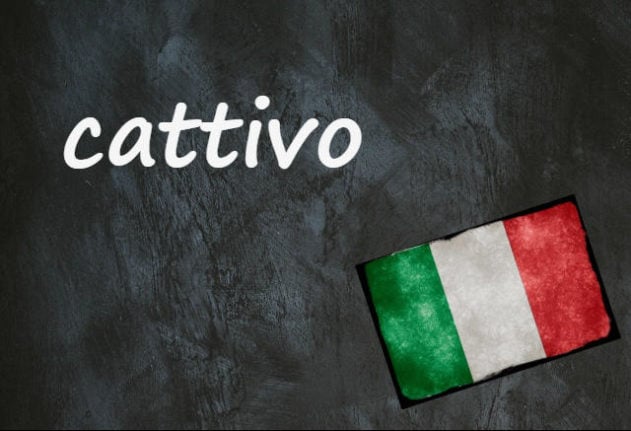 Cattivo is an adjective that basically means ‘bad’ or ‘naughty’.

It might appear to be the kind of word that passes a moral judgement on all it describes. And it does, sometimes – but not always. Which is why it’s so important to know how to use it correctly.

It can also mean that something is defective or unpleasant.

– It smells bad  (Or more Iiterally: It has a bad smell)

The meaning isn’t the only thing that trips Italian language students up.

Fittingly enough, this naughty word refuses to play by the rules – of grammar, that is.

Cattivo is an irregular adjective, because in adverbial form it becomes the word male rather than taking the suffix ‘-mente‘, as most Italian adjectives do.

– The cake turned out badly.

But cattivo sounds nothing like male. So why do we use it?

While the origins of male are easy to understand – it comes from the Latin malus, meaning ‘bad’ – cattivo has very different roots.

As cattivo sounds a lot like the English word ‘captive’, which has a Latin root (captivus), you might correctly guess that those two words are related. The Italian verb catturare (to capture) also derives from the same word.

But in modern Italian, the meaning has morphed over the years.

Cattivo was once used to descrbe prisoners, and it came to mean ‘bad’ not because prisoners themselves were associated with bad behaviour, but because of the expression in Latin Christian texts ‘captivus diaboli’ (prisoner of the devil), referring to damned souls and sinners.

You might have noticed that religion has had a huge influence on the development of the Italian language – no surprise, since most early texts were religious and most of the earliest writers were monks.

But does any of this matter to today’s language learners?

It actually does, because once you know where cattivo came from it’s a lot easier to figure out where it should go in a sentence.

Watch out for the word order

When it follows the noun, cattivo retains its original moral meaning (‘bad’ in the sense of ‘evil’). So if you describe someone as una persona cattiva, you’re saying this person is rotten to the core – they’re a “bad person”.

But if you describe an actor as un cattivo attore, they might be a morally good person, but hopeless at learning their lines – a rubbish actor.

When it precedes the noun, it has a more general meaning.

You can also say someone is in un cattivo umore, meaning a bad mood. Obviously their mood is not evil – just foul – which is why the adjective is before the noun here.

Meanwhile, farsi cattivo sangue, literally “to give yourself bad blood”, means to worry, stress yourself out, work yourself up, and generally get yourself into a state.

In cartoons or Disney films, i cattivi are the villains, the bad guys, or the baddies.

– and so the baddies ended up in prison

So now you know exactly how this word works, no one can say:

– She has bad grammar.

Do you have a favourite Italian word or expression you’d like us to feature? If so, please email us with your suggestion.