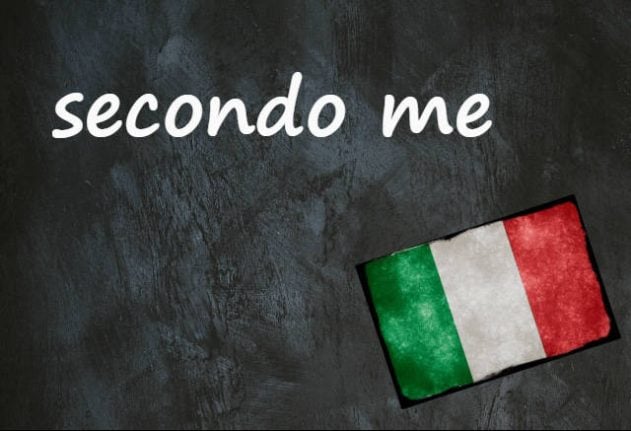 I don’t know about you, but the Italians I know have no qualms about letting rip with their opinions, whether asked for them or not. And there’s no sugar-coating things.

My Italian friends can have a raging argument about politics for half an hour, then simply shrug and say “let’s go for gelato.” Italian relatives deliver a crushing insult and, seconds later, invite me for lunch.

Because you’re not supposed to take offence. It’s just an opinion.

And yet, having an opinion is paramount. Italian friends and family insist I must have one, on every topic; whether there’s any conviction behind it seems less important. You just need to take a stance.

In fact, my English tendency to veer towards (what I think is) politeness, diplomacy or general fence-sitting when it comes to heated debates among people I barely know has been derided as “fake” or “annoying”.

When introducing your latest opinion, you’d say secondo me, which literally means “according to me” and is used like “I think…” or “It seems to me…”

– Secondo me, pioverà stasera.
– I think it will rain tonight.

– Secondo me, il prezzo è troppo alto.
– In my opinion, the price is too high

You also use secondo to ask other people for their opinions simply by changing the pronoun.

– Do you think this shirt is ugly?

– Where do you think the accent falls?

As you can see, when you’re asking a question like this you have to structure your sentence very differently than you would in English.

After a while, it might have a strange effect on your English. Once or twice I’ve accidentally said “According to me…” when I meant to say “I think…”.  That got me some very strange looks indeed.

If you’re sharing information from someone or somewhere else, you can use secondo like this:

– According to the forecast, it will rain tonight.

The word secondo comes from the Latin secundum, which means “following”, and has the same etymology as ‘second’ (as in second place.)

Secondo is also used to mean “following” or “in compliance with” in Italian – much like “according to” can also be used in English.

– Dovremmo guidare secondo il codice della strada.
– We should drive according to the traffic laws.

It might take some time to get used to Italians’ insistence on sharing unasked-for opinions on everything from politics to how you should dress, cook, or decorate your house.

Nevertheless, secondo me, being able to give your own opinions in Italian is absolutely vital.