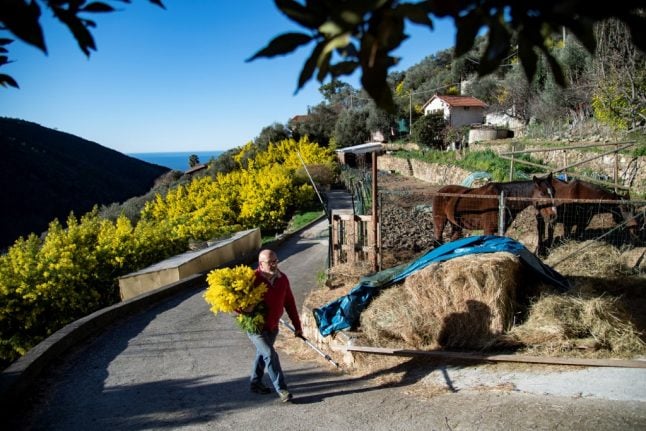 A worker collecting flowers during the early mimosa harvest near Seborga. All photos: Marco Bertorello/AFP The village of Seborga, on the Riviera dei Fiori (Flower Riviera), just across the border from France. “In recent years there has been a climate change that has favoured this early flowering, especially in February and also early January,” said Fogliarini.

“For us it's a bit of a problem because it gives us little time for the harvest and sales,” he said.

Meanwhile, the workers keep cutting the fragile flowers on the hills around Seborga on the Riviera dei Fiori (Flower Riviera), just across the border from France. The local economy in the low and isolated hills has been largely dependent on the flowers for the last 50 years.

They are hand picked, painstakingly packed into boxes and then despatched around Italy, to the rest of Europe and beyond. Extreme weather caused by climate change has been wreaking havoc on Italian agriculture in recent years.

Last year, beekeepers across the country reported the “worst honey harvest ever” thanks to unusual weather driven by climate change.