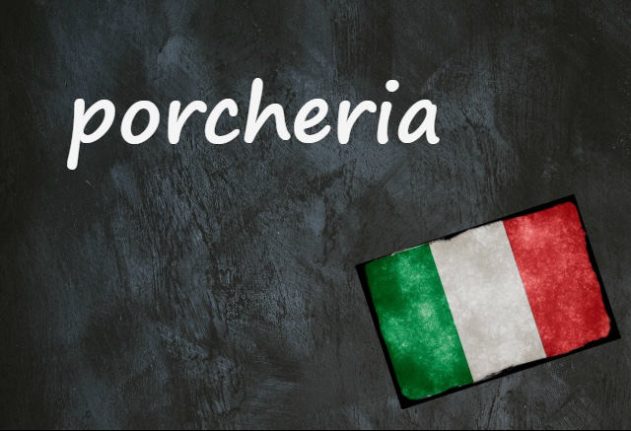 Italians are stereotypically obsessed with cleanliness, and fittingly enough, the Italian language has an endless variety of words for rubbish, filth, and dirt; including sporcizia, immondizia, ciarpame, robaccia, sudiciume, lordura, and schifezza.

But of course, not every Italian conforms to the clean-freak stereotype. This is something I can confirm after spending days scrubbing our new rental apartment, left filthy when its Italian owners moved out.

I like to think I'm somewhere in between the extremes of neat-freak and slob – although my Italian husband, brought up in a house where the toilet is bleached multiple times per day, might say something different. (And my mother-in-law takes great delight in telling me how filthy us Brits are, which is charming.)

But even this filthy Brit was disgusted by the state of the apartment, after the owners left it full of bags of rotting rubbish, broken furniture, and several years' worth of dust, dirt, and cobwebs.

My requests for them to clean it up before we moved fell on deaf ears:

– What's the problem? You're living there temporarily (literally: you're transient).

One word came up again and again: porcheria

– Pick that mess up off the ground

While this noun is often used to talk about something dirty and messy, it turns out to be a versatile word with a few possible meanings – none of them good.

According to the dictionary, porcheria can also be used to describe bad-tasting or poorly-prepared food, or a badly-done piece of work.

– A painting that's a real mess

But una porcheria isn't just any old mess. This word can also convey that something is intolerable, disgraceful or offensive, and that it's making you angry.

– What a disgusting thing war is!

– What is this crap?

And the plural porcherie usually means “trash”, “junk”, or something similar.

While porcherie in French translates to “pigsty”, that's not the case in Italian. But it's not far off.

It's probably most often used to talk about junk food, which unsurprisingly gets short shrift among many Italians, as well as other things that are of poor quality.

– It's all that junk food you've eaten!

– He eats junk and watches rubbish on television!

The only word I've found that's as satisfying to use when you're feeling truly disgusted by something is:

This one's related to the better-known che schifo and this time it emphasises the deeply revolting nature of the mess, action, or whatever else is being referred to, rather than how angry you are about it.

I'm happy to say that these words no longer describe our apartment. While I might never get those few days of my life back, at least I managed to pick up – and get lots of use out of – some interesting new Italian words along the way.

Do you have a favourite Italian word, phrase or expression you'd like us to feature? If so, please email us with your suggestion.