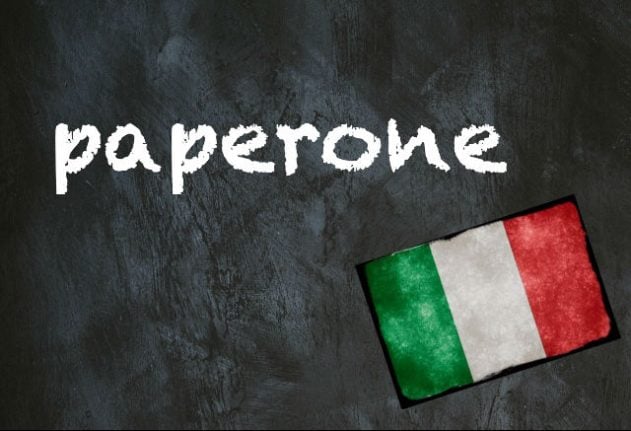 Strange as it sounds, in Italian one way to say someone's got more money than they know what to do with is to call them 'a big goose' – un paperone.

Even stranger, we have Disney to thank for the expression.

It all goes back to the early 1950s, when Italian translators were adapting the first cartoons featuring Donald Duck's wealthy uncle – a Scottish, miserly businessman known to Anglophones as Scrooge McDuck.

The Italian name needed to match Donald's, who had already made his debut in Italy. Incidentally Italians see Donald as a goose rather than a duck, which is why they based his surname on the word papero – a 'gander' or a 'gosling' – combined with the diminutive suffix ~ino.

[NB: while the Italian dictionary defines a papero as a goose, some readers have told us they use the word to describe a duck. As ever in Italy, you'll find words used differently in different places.]

Paperino's uncle needed a more imposing name, so translators attached the augmentative suffix ~one to turn a little goose into a big one. Wanting to highlight his descent from a long line of Scottish ducks (or geese), they added a noble-sounding surname, giving us Paperon de' Paperoni – roughly 'Big Goose of the Big Geese' (or if you prefer, 'Goosey McGooseface').

To his nephew and great-nephews, of course, he's known simply as Zio Paperone – 'Uncle Big Goose' or Uncle Scrooge.

The character was so successful in Italy that his name became shorthand for anyone with a lot of money, the equivalent of calling someone 'a moneybags'.

And like the name Scrooge, paperone often carries an implication of miserliness.

Luca è un paperone non tanto per il denaro che possiede, che non è molto, quanto per la sua avarizia.
Luca is a Scrooge not so much because of his wealth, which isn't huge, but because of his greed.

Calling a billionaire a 'big goose'? After all, it's no stranger than saying they're a 'fat cat'.