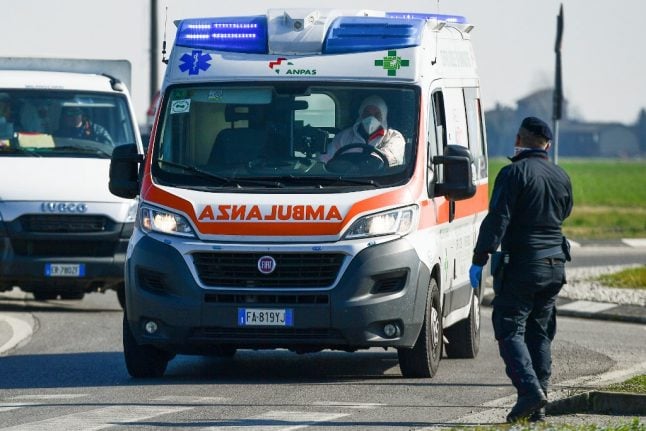 The main similarity between all the victims is that they were elderly and some had serious underlying health conditions.

By Wednesday the death toll had risen to 12 after it was announced a 76-year old woman in the north eastern town of Treviso and a 70-year-old man who became the the first death in the Emilia-Romagna region.

Italy now has over 370 confirmed cases of the virus.

The death of the two on Wednesday came a day after authorities in the northern region of Lombardy confirmed three more fatalities.

Angelo Borelli, the chief of the regional Civil Protection agency has said that the three people who died in Lombardy on Tuesday were all elderly.

That brought the number of deaths in Lombardy to 9.

Previously on Monday a 62-year-old who had been receiving dialysis for kidney problems died on Monday evening.

It came hours after the death of the sixth coronavirus patient was announced on Monday afternoon by Italy's civil protection agency.

He was from the small town of Castiglione d'Adda in Lombardy, the northern region where most of Italy's confirmed cases have been reported.

He had been in hospital in the city of Como since the weekend.

His death followed that of another man from Castiglione d'Adda, an 80 year old who had been in hospital in Milan.

He is suspected to have contracted the virus in a different hospital, where he was taken last week after suffering a heart attack.

The so-called “Patient One”, a 38-year-old man thought to have contracted the virus from someone else in Italy before spreading it to several others, visited the same hospital before doctors realised he was infected.

All three were in Lombardy, which has now seen nine of Italy's ten coronavirus deaths.

READ ALSO: Which parts of Italy are most affected by coronavirus? On Sunday an elderly cancer patient in the region passed away after contracting the COVID-19 virus, though doctors are not sure whether the respiratory illness caused her death.

The woman had been in hospital in Crema for several days, regional health authorities said.

On Saturday it was confirmed that the second death from the virus was a 75-year-old woman on Saturday from the small town of Codogno in Lombardy.

A 78-year-old Italian man in Veneto was the first European to die from the disease on Friday night. He was a retired bricklayer from the Padua area.

Italy's health minister said the man, named as Adriano Trevisan, had been admitted to hospital ten days earlier for an unrelated health issue.

On Monday Italy announced that the number of cases of coronavirus had risen to over 220. Those infected included 101 who were being treated in hospital, 27 others who were in intensive care and 94 who were in self isolation.

According to the World Health Organisation more than 80 percent of patients infected with the virus have mild disease and recover, while 14 percent have severe diseases such as pneumonia.

Around five percent of cases are considered critical and only 2 percent result in death.