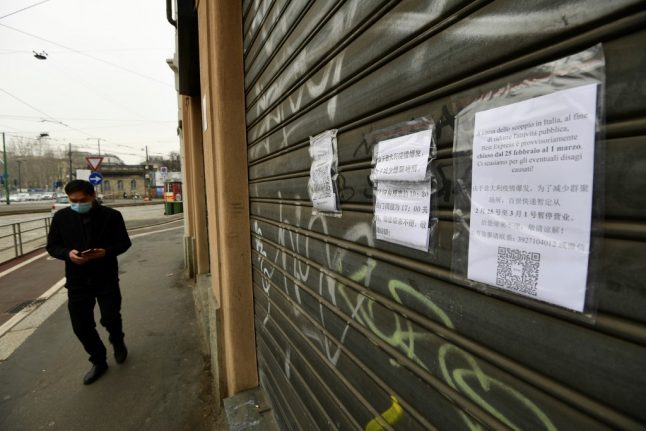 A man walks past closed shops in Lombardy on Tuesday. Photo: AFP

The number of people diagnosed with coronavirus in Italy reached over 400 on Wednesday evening, with 12 fatalities reported so far.

But concerns over the outbreak in Italy are focused on how and why the virus seemingly spread to so many people in such a short space of time.

On Friday morning, three people were found to have the virus in Codogno, a small town in the Lombardy region. Several more people were quickly diagnosed, and by Friday evening Italy had become the first country in Europe to report the death of a citizen. An ambulance outside a hospital in the Lombardy region on Monday. Photo: AFP

After that, the number of cases shot up. There were 130 by Saturday afternoon, and on Sunday afternoon there were over 200, making Italy the third-most affected country in the world after China and South Korea.

Though it's slowing down, the number of cases continues to rise and concerns remain high.

How did the outbreak start?

A 38-year-old Italian man dubbed “Patient One” by local media was admitted to hospital last Wednesday in Codogno, a town of some 15,000 people around 60 kilometres south-east of Milan.

He was diagnosed with the virus on Thurday night, and it's thought that a large number of cases in the worst-hit region of Lombardy can be traced back to him.

Codogno and several other towns in the Lombardy region, as well as one in neighbouring Veneto, were isolated on Saturday in an attempt to stem the spread of the virus.

What caused the sudden spike in cases?

The first patient's heavily pregnant wife and several doctors, staff and patients at the hospital in Codogno are thought to have contracted the virus directly from him.

But authorities have so far been unable to track down a so-called “patient zero” from whom this man contracted the virus.

It was initially believed to be a friend of the 38-year-old's who had recently returned from a visit to Shanghai, however this person tested negative for the virus and the original source of the outbreak remains a mystery. Empty streets in Codogno, Lombardy, one of the towns now on lockdown. Photo: AFP

This lack of a “patient zero” has made it much harder for health authorities to trace others who may have been exposed to the virus, and also means it's unclear whether some of the cases detected in other regions are connected to the outbreak in Lombardy

Authorities have however reconstructed the movements of patient one – where he slept, ate, walked – and other early cases in the days before they tested positive, quickly identifying anyone they may have had contact with and placing them in quarantine for testing.

As a result, some 250 people in the area were already undergoing tests by Saturday morning, and 4,100 people in the two regions of Lombardy and Veneto alone had been tested for the virus by Monday.

This large-scale testing is thought to partly explain the sudden increase in confirmed cases over the weekend.

“We're finding all of these patients now because we simply started looking for them,” Italian virologist Ilaria Capua told local media. “That is, we started to ask ourselves the question of whether certain serious flu-like respiratory forms were caused by the coronavirus or not.”

Other European countries are not currently carrying out the same kind of large-scale testing, according to Italian media reports, and one Italian hospital director remarked that this may explain why the number of confirmed cases is much lower “particularly in France and Germany.”

However in France, which has had 12 confirmed cases so far and is stepping up preparations following the Italian outbreak, health authorities had been able to identify the “patient zero” in all cases, meaning it was easier to trace others who had potentially been infected, and widespread testing wasn't deemed necessary.

As the identity of Italy's “patient zero” remains unknown, authorities are unable to say exactly how the virus may have spread.

On Wednesday night, police began an investigation into the way initial cases were handled by hospitals in the Lombardy region at the centre of the outbreak.

Reporting in Italian media has focused on whether testing for the coronavirus in the so-called “patient one” was delayed, and whether the man should have been tested for coronavirus earlier despite having no clear link to China.

The investigation comes after the prime minister, Giuseppe Conte, blamed poor management at an unnamed hospital in the region for the outbreak.

“At this point, we know that the way one hospital facility was managed was not entirely appropriate,” Conte told Italian TV on Monday. “That certainly contributed to the spread.”

Emergency commissioner Angelo Borrelli told Il Corriere: “There was a lack of knowledge among health workers, who were unable to immediately recognise the symptoms of the virus.”“At this point, we know that the way one hospital facility was managed was not entirely appropriate,” Conte told Italian TV on Monday evening. “That certainly contributed to the spread.”

On Monday, emergency commissioner Angelo Borrelli told Il Corriere: “There was a lack of knowledge among health workers, who were unable to immediately recognise the symptoms of the virus.”

Why did seven people die in three days?

On Saturday morning, Italian authorities reported the first European coronavirus death. Adriano Trevisan, aged 78, died at a hospital in the Padua area of Veneto. He had tested positive for the virus after being admitted to hospital 10 days earlier for an unrelated health issue

There have now been seven reported deaths related to the coronavirus in Italy.

The latest victim was a 62-year-old man on dialysis in the north-western region of Lombardy on Monday. Three other men were also confirmed to have died on Monday, all of them in their 80s and from Lombardy.

At least three of the deceased had other serious health problems, and most were over 75 years old.

According to the World Health Organisation, around five percent of all cases are considered critical and only two percent result in death.