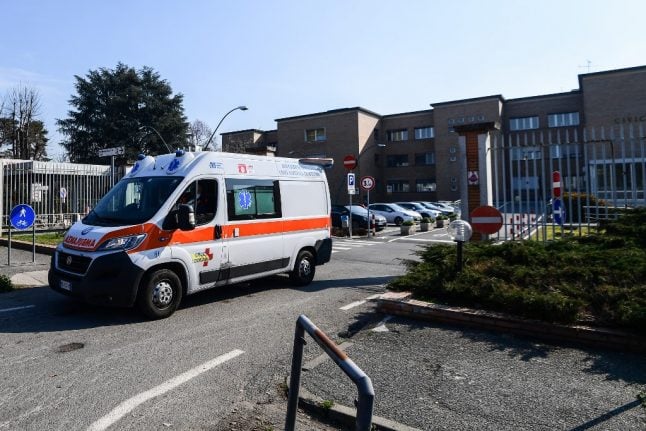 On Tuesday evening local officials and media sites in Italy reported three more deaths from coronavirus in the northern region of Lombardy.

It brought the death toll from the recent outbreak of the virus to 10. All 10 deaths have occurred since Friday when the number of infections began to surge.

Angelo Borelli, the chief of the regional Civil Protection agency has said that the three people who died on Tuesday were all elderly.

Authorities say the number of virus cases in the country has risen to 322.

MAP: These are the parts of Italy most affected by coronavirus

Tuscany reported its first two cases, including one in the tourist destination of Florence, while Sicily recorded one: a tourist from the worst-hit Lombardy region.

Italy and its neighbours have decided not to close their borders over the coronavirus, saying it would be a disproportionate and ineffective measure, their health ministers said Tuesday.

The decision came at an emergency meeting in Rome over the outbreak of the virus in Italy between Health Minister Roberto Speranza and his counterparts from Austria, Croatia, France, Germany, Slovenia and Switzerland.

It came hours after three other men were confirmed to have died on Monday, all of them men in their 80s from Lombardy.

Another man and two women died over the weekend.

At least three of the deceased had other serious health problems, and most were over 75.

According to Italy's health ministry, more than 4,100 people had been tested for the virus.

Italy has now confirmed more cases of the COVID-19 virus than any other countries except China and South Korea, partly due to large-scale efforts to test thousands of people within days.

But new infections are increasing at a slower rate, said the head of the civil protection agency that is managing Italy's response to the coronavirus.

“I think the numbers that we have registered in Italy and in the rest of the world have been confined to reasonable figures,” said Angelo Borelli, adding that in his opinion the data did not point towards an impending pandemic.

ANALYSIS: Why has Italy seen a surge in coronavirus cases? A sign advises that a hospital's emergency room is closed in one of the affected towns in Lombardy. Photo: AFP

The spread of the virus has disrupted high-profile events including Milan Fashion Week and the Venice Carnival.
On Monday evening, sports minister Vincenzo Spadafora announced that six Serie A football matches would be played behind closed doors.
And in Milan, operas have also had to be cancelled the city's famed La

Scala.
Masses in churches across the affected regions have been cancelled and funerals limited to immediate relatives only.
'Eye of the storm'
The stock market in Milan was down over 5.0 percent on Monday in a broad-based sell-off over virus fears.
The Italian hotel association said it was “very worried” about the impact on bookings and that the country was in the “eye of the storm”.
Even as far south as Rome some tourists have started to take precautions, despite the city having no recent cases.

Authorities suspect several cases can be traced back to a 38-year-old man whom authorities have called “patient one”. Investigators are reconstructing minute by minute his movements over the past few weeks — where he slept, ate, walked — in a bid to trace everyone he could have come into contact with.

It is believed he may have transmitted the virus to several other people in a hospital in Lombardy before doctors realised he was infected. The outbreak has prompted a series of drastic security measures to try to check the spread of the virus.

Eleven towns — ten in Lombardy and one in Veneto — are under lockdown, with some 50,000 residents prohibited from leaving.

Schools have been closed as a precaution in Lombardy, Veneto, Piedmont, Emilia Romagna and Friuli Venezia Giulia, while regional authorities have ordered bars, restaurants, cinemas and discos to close.

The spread of the virus has disrupted high-profile events including Milan Fashion Week and the Venice Carnival while Serie A football matches will be closed to the public, and the upcoming annual Children's Book Fair in Bologna has been postponed. Operas have also had to be cancelled at Milan's famed La Scala.

Coronavirus: Italian Serie A football matches to be played in empty stadums

Amid reports of panic buying, mayor of Milan Beppe Sala urged people to remain sensible: “Rather than dashing to the supermarkets to grab food, perhaps we should spend time looking after the most vulnerable, such as old people, who are particularly at risk.”

According to Italy's national statistics institute, there are over seven million people in the country over the age of 75.

On Tuesday, Italy will host a meeting in Rome of health ministers from neighbouring countries Austria, Croatia, France, Germany, Slovenia and Switzerland to discuss the outbreak.