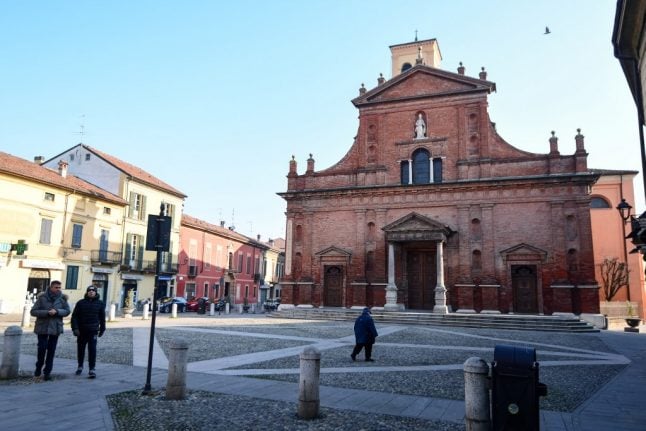 The deserted "September 20th" Square outside the San Biagio church is pictured in Codogno, southeast of Milan, on February 22, 2020. AFP

The sweeping measures taken in northern Italy to try to contain Europe's worst outbreak of the novel coronavirus are starting to take more than just a physical toll, with mental health professionals reporting some residents falling victim to anxiety.

As 50,000 people stay in lockdown in infection hotspots and tens of millions are affected by the closure of schools and other institutions, psychologists and psychiatrists say there have been concerning signs in some aspects of public behaviour.

Rome-based psychiatrist Rossella Candela points to the empty shelves in supermarkets due to panic buying as one example.

“Certain people adapt. But others react as if they were under bombardment in the Second World War,” she told AFP.

The rush to buy face masks — which have now all but sold out in pharmacies in the country's north — is part of the phenomenon, she says. Italian Finance guards (Guardia di Finanza) officers patrol by a check-point at one of the entrance of the small town of Zorlesco, southeast of Milan. AFP

After the first wave of panic, there then comes a low-level permanent sense of anxiety, fed by the disruption of normal routines in many different fields.

“In our small Lombard villages, cancelling Mass is crazy, unprecedented,” says Alessandra Braga, a psychotherapist in Brescia, a city in the worst-affected Lombardy region.

The closure of schools and offices means that “many people are just spending all day at home watching television programmes where people are only talking coronavirus, it's completely anxiety-inducing,” says Braga, adding that she was encouraging patients “to go out, to get some air”.

But, she says, “it's like an emotional epidemic, and emotions are hard to control”. The main street of Secugnano, the closest village to Zorlesco, southeast of Milan on February 26, 2020. AFP

While authorities are trying to reassure the population, it's difficult to combat fear when one is confronted by “something intangible, invisible, like a virus,” says psychologist Gabriele Zanardi in Pavia to the south of Milan.

He says that paradoxically, the most worried seem to be outside the areas most heavily affected, as they haven't experienced the reality of the outbreak.

As a result of the invisible nature of the condition, “people try to put a face to this invisible enemy, be it a Chinese person, someone with a cold,” Zanardi says.

Milan's Chinatown has been deserted for three days. Italian Financial police (Guardia di Finanza) officers patrol by a check-point at one of the entrance of the small town of San Fiorano, southeast of Milan. AFP

In Turin, after the first death from the outbreak was announced, a 40-year-old Chinese woman was attacked in the street by strangers who shouted: “You have the virus, go away or I'll kill you.”

“The phobias linked to this virus are getting the better of reason and scientific discourse,” she said.

Among the psychologists that AFP spoke to, the biggest worry in the current climate is misinformation.

A fake announcement that all Italian schools were staying closed until March 5 had to be denied by officials on Tuesday.

And there has been no shortage of conspiracy theories: that the virus survives for six days on packages from China, that the outbreak was aimed at destroying Lombardy's prosperous economy…

But another human reaction in times of crisis — humour — has not been entirely absent.

Braga recounts one of her patients joking that “after a week all stuck in the house, if the kids don't die of coronavirus, I'm going to kill them myself!”

“I think we've seen the peak of the uncontrolled terror of this past few days,” says Zanardi.

“Life is slowly getting back to normal. People are getting used to it, the exceptional will become normal.”