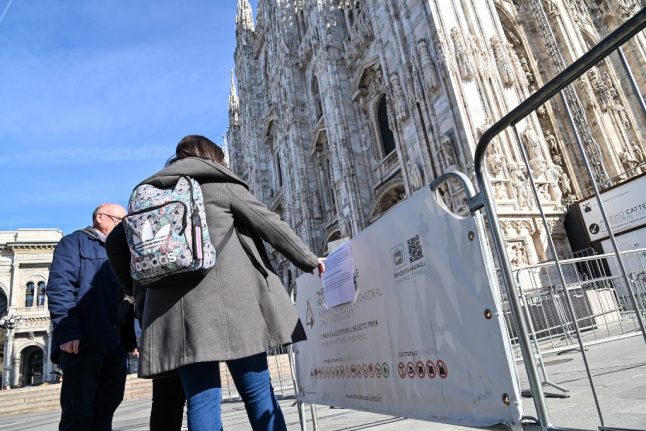 200 million euros' worth of travel and acommodation bookings have been cancelled in March since the outbreak began a week ago, reports Italian tourism association Assoturismo Confesercenti.

“In recent history Italian tourism has never experienced a crisis like this,” Vittorio Messina, National President of Assoturismo, stated in a press release. “It is the darkest moment. Not even 9/11 affected it so heavily.”

Bookings are also “sharply down” until June, reported Assoturismo.

While many of the cancellations were in regions heavily affected by the recent outbreak, the drop in visitor numbers is also hitting areas where few or no cases have been reported. “The sector – which is worth about 13 percent of Italian GDP – risks sinking”, Messina said.

“If the situation of generalised panic continues, thousands of businesses, especially small ones, will first enter a liquidity crisis, then close their doors,” he continued. “We urgently need to work towards normalisation.”

The region of Lombardy, the area worst-hit bu the outbreak, reported that tourism in the region is “on its knees”.

“In a few days, the coronavirus emergency has plunged one of the most important sectors in our region into crisis,” said Francesca Brianza, Vice-President of Lombardy's Regional Council.

“The tourism industry here is seeing a dramatic drop of over 40 percent.”

90 percent of all bookings in Rome were reportedly cancelled, and 80 percent in Sicily, according to Assoturismo.

The region of Lazio, which includes Rome, has had only three cases of coronavirus – and all are now recovered. Sicily has three confirmed cases.

MAP: Which regions of Italy are most affected by the coronavirus outbreak?

The report stated that the worst-hit areas are expected to be Italy's so-called “art cites”, such as Florence, Venice, and Rome, which get the highest proportion of visitors from abroad – making up about half of the total.

However Italians, too, are widely expected to stay at home amid fears of the virus spreading.

While 12 people have now died and over 500 cases of coronavirus have been confirmed across Italy, authorities say there is no reason to fear visiting the country.

Italian foreign minister Luigi di Maio on Thursday stressed that it's safe to visit the country, saying: “Children are going to school in most Italian regions, and if they can go to the classroom tourists and entrepreneurs can still come to Italy.”

Twelve regions have reported at least one case of the virus, including Sicily at the country's southern tip.

But Di Maio insisted: “Out of over 7,000 towns in Italy, just over a dozen are affected by this epidemic.”

He said Italy had more cases than other European countries because it was performing mass tests — over 11,000 so far, which caught positive cases that did not, however, result in illness.

A positive result does not mean a person is contagious.

Italy was “reliable and transparent”, Di Maio said, adding it was being unfairly penalised by holidaymakers cancelling trips to Milan's Gothic Duomo or the canal city of Venice over fears they might catch the virus.

No government has yet imposed a travel ban on Italy.

The country's international borders remain open, and the only systematic flight restrictions are on direct flights between Italy and China, which were suspended at the end of January.

The only no-go areas in Italy are a handful of small towns in northern Italy, where authorities have ordered a lockdown to help contain the virus. A woman takes a selfie in Milan. Photo: AFP