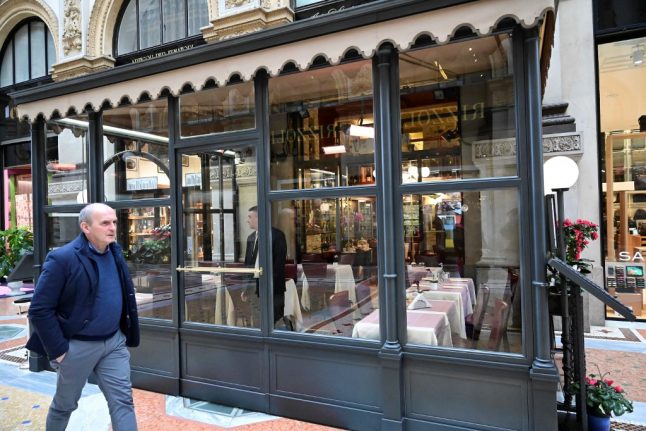 A man walks past a restaurant in central Milan on Thursday. Photo: Miguel Medina/AFP

While some northern cities including Milan and Venice have been affected by the closure of businesses, public buildings, and museums this week, as well as the cancellation of some major events, this has not been the case in Rome, Florence, and many other Italian cities.

The worst-hit regions in the north have also enforced temporary school closures in some areas, however all are now considering reopening schools as soon as Monday.

The only areas affected by emergency quarantine measures are those in the so-called “red zone”, the 11 small towns in Lombardy and Veneto which have been placed on lockdown for several weeks.

Elsewhere, many museums, tourist attractions, and businesses which had been temporarily shuttered have announced they'll soon be reopening.

In Milan, the Duomo is set to reopen on Monday, with a new ticketing system aimed at managing crowds, after being tempoarily closed to visitors this week. A woman takes a selfie outside Milan's cathedral, the Duoma, which was temporarily closed this week. Photo: AFP

Civic museums in the surrounding Lombardy region which had closed will also reopen on Monday, authorities confirmed.

Many bars, cafes, and restaurants in parts of Lombardy and Veneto, which had been asked to close early as a precaution this week, will also be allowed to open as usual.

Businesses in the industrial north of the country are keen to get back to normal as soon as possible, Italian media reports, with the Italian economy expected to take a severe hit following the coronavirus outbreak.

The Italian government has urged tourists not to abandon their plans to visit Italy, insisting the country is safe to visit, after the tourism sector said it was facing the “worst crisis in recent history” following the outbreak.

“Out of over 7,000 towns in Italy, just over a dozen are affected by this epidemic,” said Italy's foreign minister Luigi Di Maio on Thursday.

“If our children are going to school, tourists and business people can come,” Di Maio said. St Mark's Square in Venice is quieter than usual, but remains open to visitors. Photo: AFP
Most of Italy's major cities and tourist sites have been unaffected, with hotels, museums and businesses remaining open.
In Rome, museums and tourist sites  have remained open this week, with the exception of the city's catacombs, as the damp conditions underground were thought to increase the risk of transmitting viral infections.

There are currently no confirmed cases in the region of Lazio, which Rome is part of, as the three people found to be infected in the region previously have all now recovered.

READ ALSO: Is it still OK to visit Italy amid the coronavirus outbreak?

In Florence, all museums, tourist sites, restaurants and shops have remained open. In fact, the city has announced free entry to the city's civic museums from March 6th-8th, an initiative aimed at reducing fear. Tuscany, which includes Florence, has reported a handful of confirmed cases, but is not among the worst-affected regions.

Venice cancelled the final events of its famed carnival last weekend as a precaution after an outbreak in the surrounding Veneto region, and temporarily closed down some of its museums. However, most attractions and businesses remain open as usual.

Southern Italian regions have seen only a handful of confirmed cases between them, and life is going on as normal in Naples, Bari, Palermo, and other towns and cities in the south of the country.

Popular tourist sites such as the Amalfi Coast and Pompeii are not affected.

There are currently no restrictions on travelling to and within Italy, other than to the small “red zone”, where police are preventing people from leaving or entering without a permit. A shuttered bar in one of the towns under lockdown in Lombardy. Photo: AFP

For residents, everyday life carries on as normal across most of Italy.

The government has denied reports this week that it would be closing all schools across the country.

Some regions and towns in the worst-hit areas have decided to temporarily close schools, as well as other public buildings, however officials in those regions say they expect schools to reopen soon.

Not all schools in Italy are closed because of #coronavirus.

The region of South Tyrol has announced schools will be reopened on Monday. The Veneto and Emilia-Romagna regions are also expected to open schools again from Monday, and a final decision is expected this weekend.

“I think schools can safely reopen from next Monday unless the scientific community tells us that we have an imminent danger,” said Veneto regional governor Luca Zaia.

Lombardy, which has seen by far the highest number of cases, is also considering allowing schools to reopen next week. Regional governor Attilio Fontana said a decision will be made this weekend.

Across Italy, all school trips remain suspended until at least March 15th.

By Thursday night some 650 cases of coronavirus had been confirmed in Italy, with around 400 of those in the Lombardy region. That figure includes 45 cases where the patient was deemed to have recovered from the virus.

According to the World Health Organisation more than 80 percent of patients infected with the virus suffer mild illness and recover. Around two percent of all cases are fatal.