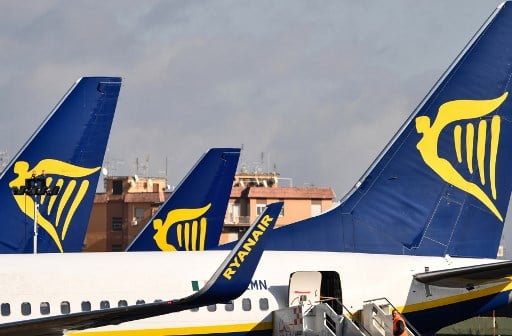 Low.cost carrier Ryanair is among those to have announced major flight cancellations on Italian routes this week.
Norwegian on Saturday became the latest airline to suspend some flights to Italy, with all flights on its Oslo-Milan route cancelled until May following advice from the country's health authorities.
Scandinavian airline SAS on Tuesday suspended all flights to northern Italy following updated travel advice from Denmark and Norway due to the outbreak of the new coronavirus, Covid-19.
SAS flights to and from Milan, Bologna, Turin and Venice will be suspended from March 4th until March 16th, the airline said on Tuesday. It said it would be in contact with affected passengers.
Delta Air Lines and American Airlines are temporarily suspending some flights between US airports and Milan because of the outbreak of the novel coronavirus in parts of northern Italy, the two carriers announced on Monday.

Delta is suspending flights between New York's busy John F. Kennedy International Airport and Milan Malpensa, the largest airport in northern Italy and a major hub for Alitalia, the airline said in a statement Sunday.

Delta's last New York-to-Milan flight will take off Monday, while the last flight in the opposite direction is scheduled for Tuesday. Service is set to resume on May 1 or 2.

Delta added that flights between Rome and Atlanta were not affected. American Airlines said late on Saturday that it was suspending service between New York and Milan as well as between Miami and Milan until April 25, citing a “reduction in demand.”

Both airlines said passengers will have a choice of rebooking on a later flight or being reimbursed.

The decision came after the US State Department raised its alert level for travel to the Lombardy and Veneto regions of northern Italy to its highest level  Level 4, a “do not travel'' alert, due to the COVID-19 outbreak.

Lombardy, which includes Milan, and Veneto are the two regions worst hit by the coronavirus outbreak.

The US has had a Level 3 alert, advising passengers to “reconsider travel”, in place for the whole of Italy since Saturday.

Both Delta and American, as well as the third big US carrier, United Airlines, had previously reduced or suspended service to China, where the epidemic broke out in late December, as well as to several other Asian countries.

Easyjet said it was cancelling flights to northern Italy due to the impact the ongoing coronavirus crisis is having on the airline.

British Airways has cancelled some 56 roundtrip flights are cancelled from London Heathrow and Gatwick to Italian destinations including Milan, Bologna, Bergamo, Venice and Turin between March 14 and March 28  due to “reduced demand”.

Ryanair announced on Monday it will be reducing the frequency of some routes by up to 25 percent amid the outbreak, particularly affecting flights to and from Italy.

Wizz Air is another low-cost carrier announcing cancellations on Italian routes. It stated that it would be cutting two-thirds of its flights to and from Italian airports for three weeks, between March 11 and April 2, due to lack of demand.

Turkish Airlines has cancelled all flights to Italy from the beginning of March.

Austrian Airlines is reducing its flight schedule to Italy in March and April by 40 per cent. This includes a cut in capacity on routes from Vienna to Milan, Venice, Bologna, Florence, Rome and Naples.

Brussels Airlines has cut the number of flights to Rome, Milan, Venice and Bologna by 30 per cent until 14 March

Airline industry experts have predicted that the impact of the coronavirus outbreak on travel plans could put financially-troubled airlines such as Italian carrier Alitalia out of business.

British airline Flybe collapsed earlier this week, citing lower passenger number due to coronavirus as a factor. This meant the loss of routes from the UK to Milan.

The most-affected Italian airports are those in the north of the country, including Milan, Bologna, Bergamo, Venice and Turin.

But as passengers cancel trips to all parts of Italy amid coronavirus fears, more routes may be hit by cancellations.

Last Friday Italy's foreign minister pleaded with tourists and business people not to turn their backs on Italy over the crisis.

However, many travellers are concerned that they may face disruption, including quarantine measures, upon their return to their home countries after travel to Italy, as a growing number of countries warn against non-essential travel to the worst affected parts of northern Italy, or to Italy as a whole.

Representatives of Italy's tourism industry said it is now experiencing the “biggest crisis in recent history” amid mass cancellations of hotel and travel bookings due to coronavirus fears.