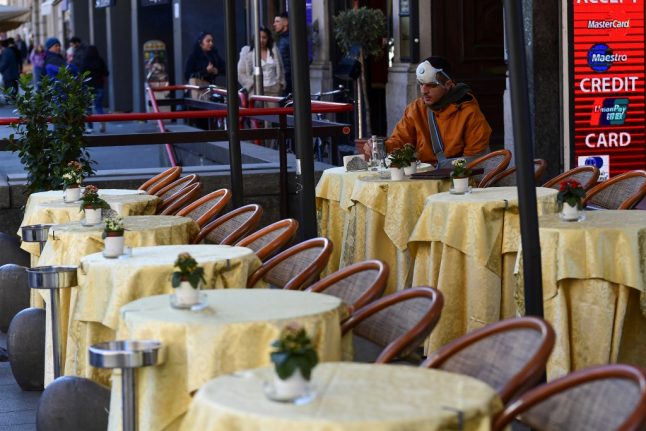 Foreign minister Luigi Di Maio slammed a 10-second gag on the satirical Groland programme on French network Canal+, in which the red tomato base, white mozzarella and green mucus make up the colours of the Italian national flag, as “bad taste and unacceptable”.

Globally, more than 3,100 people have died of the coronavirus and over 90,000 have been infected.

Italy is the worst-hit country in Europe, with 79 deaths and over 2,500 people infected.

“Here's the new Italian pizza, which is going to spread around the world,” the fake advert says.

Countries from Britain to China and France have reported cases of people bringing the virus back with them from Italy.

“Making fun of the Italians like that, with the coronavirus emergency we are facing, is profoundly disrespectful”, Di Maio said, adding that he had ordered the Italian embassy in Paris to voice Rome's displeasure.

He insisted the media were “morally obliged” not to spread disinformation, saying the Italian economy was paying the price.

The tourism sector in Italy has been hit particularly hard, with lots of airlines cutting or reducing flights to the north, where the outbreak is concentrated, and hotels reporting widespread cancellations while monuments and museums lie eerily empty.

Soon after Di Maio's comments, Canal+ issued a statement admitting that its joke was “in very bad taste”.

Canal+ said it had removed the clip from its reruns and replay channel, and was “sending a letter of apology to the Italian ambassador to Paris this [Tuesday] afternoon”.

READ ALSO: Is it still safe to visit Italy after the coronavirus outbreak? “This is not satire, it's an insult to an entire nation,” she said. “As the European and international authorities have repeatedly stated, it is not transmitted through food.”

Despite that, Di Maio said unspecified countries had “called for a 'virus free' label on Italian products”.

The French joke also bombed with Italian farmers' association Coldiretti. It slammed it a “stab in the back” for the Made in Italy industry, worth some €5 billion in exports to France, the second largest market after Germany.

Italy and France historically compete on wine, cheese and bubbles, with Prosecco giving Champagne a run for its money.

The Alpine neighbours have long had turbulent relations. The last time the neighbours swapped outright insults was under Italy's populist government, when political and diplomatic dialogue effectively ground to a halt.

But Di Maio opted on Tuesday for the moral high ground, inviting the video's makers “to come and eat pizza in Italy, a pizza like they have never eaten in their lives”.

Canal+ made no mention of Di Maio's offer in its statement.