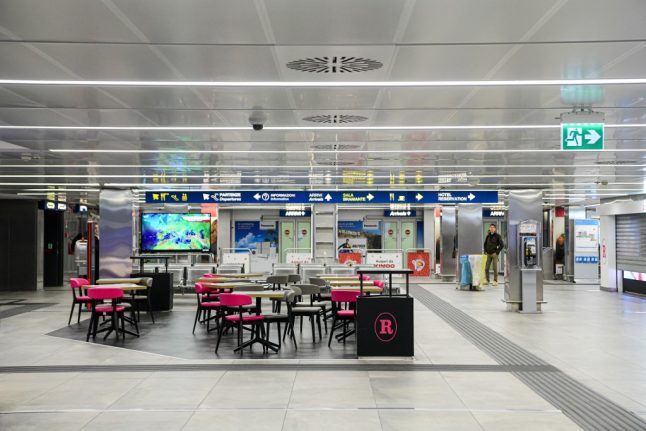 An empty room at Milan's Linate airport after the Italian government announced the Lombardy region and other parts of the north. Photo: AFP

The government approved drastic measures early Sunday putting much of the north under quarantine measures until April 3 in an attempt to halt the spread of the coronavirus.

Prime Minister Giuseppe Conte said in a press conference held in the early hours of Sunday morning that he had signed off on plans to strictly limit movement in and out of large areas including Venice and the financial capital Milan for nearly a month.

“#Coronavirus, the new decree is finally approved,” Conte wrote on Twitter, confirming earlier reports of the lockdown published in the newspaper Corriere Della Sera and other media.

With more than 230 fatalities, Italy has recorded the most deaths from the COVID-19 disease of any country outside China, where the outbreak began in December.

The government also ordered also the closure of all cinemas, theatres, museums, nightclubs and casinos throughout the country, according to the text of the decree published on the government website.

Without a “serious” reason that cannot be postponed, such as urgent work or family issues, people will not be allowed to enter or leave the quarantine zones, Corriere Della Sera reported.

READ ALSO:  What you need to know about the new coronavirus quarantine measures in northern Italy

These include the entire Lombardy region as well as Venice and its surrounding areas, and the cities of Parma and Rimini – affecting a quarter of Italy's population of 60 million.

People in these areas are advised to stay at home as much as possible, the newspaper said, adding that the restrictions would be in place until April 3.

People will be allowed to return home from outside these regions, while bars and restaurants are allowed to remain open provided it is possible for customers to stay one metre (three feet) away from one another.

The Italian government has found itself at the forefront of the global fight against an epidemic that has spread globally since first emerging in China late last year.

The country of 60 million people has recorded a total of 233 deaths and 5,883 infections in the past two weeks.

The virus has now spread to all 20 Italian regions and Italy is by far the worst-hit country in Europe, and among the most severely affected worldwide.

Italy had kept 11 small towns and villages with a combined population of 50,000 in a quarantine “red zone” for the past two weeks.

The government had been expected to announce an expansion of that zone. But no Italian media had predicted that the broader quarantine would cover such a large area, or include the cities of Milan and Venice.

Milan is Italy's financial capital and has a population of just under 1.4 million people. The entire Lombardy region is home to 10 million and is one of Italy's richest.

The government decree also covers parts of the Veneto region around Venice, as well as Emilia-Romagna's Parma and Rimini.

Those three cities have a combined population of around 540,000 people.

The month-long ban on entry to places such as Venice are expected to be a crippling blow to the city's already-struggling tourism industry.

There was no immediate word on whether the Italian Stock Exchange in Milan would remain open.

“I cannot fail to stress that the draft decree of the prime minister is – to say the least – messed up,” Lombardy region president Attilio Fontan was quoted as saying by Italy's Sky TG24 rolling news channel.

The government degree said people in the quarantine zones would be advised to stay at home as much as possible.

It shuts down all night clubs as well as gyms and swimming pools in the affected areas. Bars and restaurants will remain open but must ensure that everyone is seated at least one metre (three feet) apart.

It stresses that entry into and out of the new quarantine zones would only be allowed for “serious reasons”.

The draft decree says that those who violate the restrictions could be punished by fines and jailed for up to three months.

Ministers decided at an all-night emergency meeting that broke up early Saturday to call in retired doctors as part of an effort to bolster the strained healthcare system with 20,000 additional staff.

But the government's most immediate concern is that northern virus-hit regions might start to run out of hospital beds.