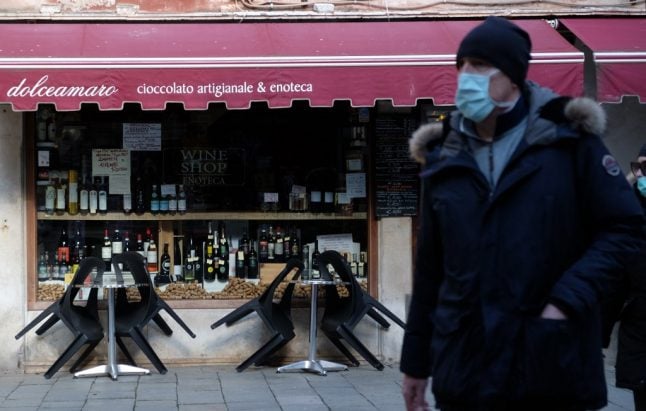 A man walks past a closed shop in Venice on Sunday. Photo: AFP

In the early hours of Sunday morning, the Italian government approved a new emergency decree which included placing some 15 million people living in northern Italy inside a new “quarantine” zone.

Prime Minister Giuseppe Conte said at a press conference held shortly after 2am that he had signed off on plans to strictly limit movement in and out of large areas, including Venice and the financial capital Milan, for nearly a month.

With more than 360 fatalities and 7,000 confirmed cases, Italy is by far the worst-affected country in Europe.

It has recorded the most deaths from the COVID-19 disease of any country outside China, where the outbreak began in December.

As the new decree comes into force, here's how it affects everyday day in Italy as well as travel to and from the parts of the country included in the new quarantine area.

Which parts of Italy are affected by the measures?

The emergency decree applies to the entire Lombardy region, which includes the city of Milan, as well as other municipalities in northern Italy including in and around Venice, Padua, Parma, and Rimini.

The measures are expected to remain in place until April 3rd.

The area is now being referred to by Italian media as the “orange zone” (zona arancione), as the new quarantine measures being put in place remain less severe than those in this small “red zone” (zona rossa), where for the past two weeks 11 small towns in Lombardy and Veneto – the regions worst hit by the coronavirus outbreak in Italy – have been on lockdown in an attempt to contain the spread of the virus.

What are the new “quarantine” measures?

In the orange zone areas, the following rules apply according to the government decree published on Sunday morning.

How will these measures be enforced?

The decree states that those who violate the restrictions could be punished by fines and jailed for up to three months.

Businesses including shops and restaurant wishing to remain open must introduce crowd-control measures,  ensuring that any seated customers are at least one metre (three feet) apart. Any business found to be violating the rules faces “suspension of activity”.

Are other parts of Italy affected?

The government also ordered also the closure of all cinemas, theatres, museums, nightclubs and casinos throughout the country, according to the text of the decree published on the government website.

While churches and cathedrals may remain open to worshippers, mass is prohibited across the country from Monday.

People returning to other parts of Italy from the orange zone may face quarantine on arrival, as regions adopt their own measures aimed at preventing the spread.

The southern Italian region of Puglia, which has already seen one death from the virus, was the first to announce a new law on Sunday morning requiring anyone returning to the region from within the orange zone to contact their doctor and self-isolate for 14 days. Anyone found to have violated this law could face arrest, Italian media reported. There has been some confusion over how strict the quarantine measures would be, following the leak of a more severe draft version of the emergency decree late on Saturday night. These reports prompted many people working or studying in northern Italy to immediately travel home to other regions, and Italian media reported crowds at train and bus stations late on Saturday and early on Sunday.

What if I'm planning to travel to northern Italy? Are airports open?

Many people travelling to and from airports in northern Italy have also been confused and concerned by the announcement of the new measures.

The lockdown does allow for the return home of those who were in the affected areas but live elsewhere, including tourists.

Flights appeared to be operating normally out of Milan and Venice airports and it was also business as usual at train stations on Sunday.

There has been no announcement regarding any future closure of airports or the cancellation of flights or trains to and from the affected area.

Milan and Venice under lockdown, yet still no FCO warning against travel. That’s going to leave travellers who understandably don’t want to travel £100s out of pocket.

BA, EasyJet and Ryanair all still flying. And not allowing passengers to cancel and claim refund

At the press conference on Sunday morning, the prime minister said the decree does not mean an “absolute ban” on travel to the area.

“It does not stop everything,” he said explaining that it would be possible for people to entrer and leave the area “for proven work needs or for emergencies and health reasons”, though anyone doing so can expect to be stopped and questioned by police, he said.

The Italian government has not advised of any travel restrictions to other parts of Italy outside of the red and orange zones.

The borders with Austria, Switzerland and Slovenia remain open.

Many airlines are still operating flights to airports in the affected region, and are not showing any travel warnings on their websites at the time of writing, though some flights to northern Italy had already been suspended.

Hi! If you have not received any SMS or email from us, your flight is scheduled to operate.
Please check this link for travel changes options as Ryanair tickets are not refundable: https://t.co/eZvvfNv7HQ
All updates here https://t.co/5ATxLOd8Ce
Claudio

The UK foreign office is now advising against all but essential travel to the whole of the Lombardy region, as well as certain provinces in the regions of Emilia Romagna, Marche, Piemonte and Veneto. You can check for updated advice here.

The current UK government advice is to self-isolate for 14 days only if you've come back from the extended lockdown area. Travellers to all other parts of Italy are advised to self-isolate only if they have symptoms of viral infection.

Travellers to the affected region are unlikely to be prevented from leaving, but may face quarantine measures and disruption when returning home depending on rules set by their country.

For the most up-to-date advice, please check the official guidance from your country's embassy or foreign ministry before travelling to the affected area.